With a promising police career and a baby on the way, Marc’s life seems to be right on track – then he meets fellow policeman Kay. During their regular jogs, Marc experiences a never-before-felt sense of ease and effortlessness – and what it means to fall in love with another man. Torn between his family and his new feelings for Kay, Marc sees his world careening more and more out of control. Suddenly, his life is in free fall and Marc realizes that, try as he may, he can’t make everyone happy – least of all himself.

This film is not a cliché. No movie gave me hope and took it right away leaving just expectations behind like this one did.

Once the love between two beautifully interpreted characters begins, one is immersed in the struggle they’re into because of their feelings. Max Riemelt completely nailed it, his character (Kay) seems to have found the true Marc(Hanno Koffler)by giving himself to him. I can agree that this is “the German answer to Brokeback Mountain” but it lacks at exposing the whole life of the characters, you just can imagine where they come from and how did they get to where they are.

Between other things, the sound was impeccable, it makes you feel very closely to the moment and the feelings surrounding a scene. The costume design was a little bit stiff but you can easily see that the characters are going trough a routine and they are completely changed when they are not in regular situations. Also, the locations were beautiful without being very detailed.

It is focused on the fight generated by love and the consequences of the choices you make while you are trying to define yourself. 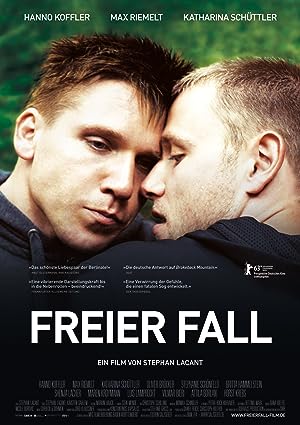