Summer 1968. Because he is his stepfather an eyesore, the 14 year old Wolfgang is summarily sent to a reform school. There in Freehold learns the hot spur not only violence by the guards, but also by his comrades. Wolfgang is determined to leave the home as soon as possible. But the unpredictable moors makes him escape a spanner in the works … Cynical the name of the place could hardly be: “Sanctuary” is an educational institution, which until the 1970s as the toughest of its kind in Germany. Here was beaten brutally on behalf of the Church and abused – a true hell on earth for underage boys who were there “disposed of”. With glorified, blurred images (Camera: Judith Kaufmann) the cruel fate of the boy is shown. Who sows violence will reap violence – a realization for the sanctuary of the best evidence. A hard film with good actors whose dialogues but unfortunately often not understood. Here was obviously sloppy sound editing. (google translated)

I only live a few miles away from Freistatt, Germany, and at least regionally the movie got some attention. “Freistatt” deals with a topic that is not often dealt with in movies, chose original locations for filming and lists some very able actors (Max Riemelt, Alexander Held) in its cast.

There is no fluff or filler in this movie, no boredom coming up. But while it is a good “time piece” in the sense that it gives you a good idea what it was like in that particular time and situation, there is no plot that is strong enough to really hold the movie together.

Ultimately, I would only recommend it to those who are curious about or have any connection to those failures of the education system that existed for way too long. 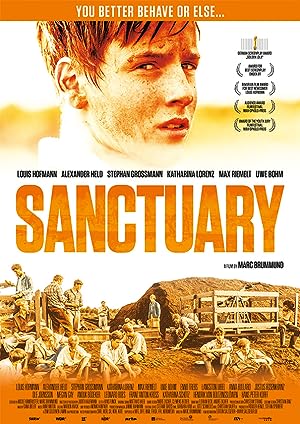 Sanctuary (2015)
104 min|Drama|25 Jun 2015
7.2Rating: 7.2 / 10 from 1,169 users
A young free-minded German 14 year old boy in a northern Lower Saxony province town is in love with his mother. His stepfather identifies him as a competitor, and has him brought to a …
Director: Marc Brummund
Creator: Nicole Armbruster, Marc Brummund
Actors: Louis Hofmann, Alexander Held, Stephan Grossmann, Max Riemelt

2 reviews for Freistatt 2015 with English Subtitles