The trials and tribulations of Eddie and other transvestites in Japan.

I didn’t know anything about this movie when a friend of mine recommended it in the most enthusiastic way. The guy is a a very young movie buff, with a keen interest in quality movies (experimental, avant-garde, new wave, independent, iconoclast, unorthodox, stuff like that). I share his interests (despite my old age), and any discussion we have is real brainstorming. Two days ago he told me about planning to organize kind of jam-session with friends of his age to watch a battery of movies (I declined the invitation: No Country for Old Men). “Funeral Procession of Roses” was mentioned in this context.

Back home I found references about the movie on the web, then a copy of the film on you Tube, with Spanish subtitles. I stayed long in night to watch the movie. Really a great cinematic experience. As I said, I didn’t know anything about it, nor about director Toshio Matsumoto. A movie from 1969, belonging to the “Nuberu Bagu”, the Japanese New Wave, recalling all I knew about that period in the history of Nippon cinema, first of all bringing back to my memory the four or five movies by Oshima that I had the chance to watch.

You say “Nuberu Bagu”, you say Buñuel on the steroids; and the film of Matsumoto is no exception: the ending scene of “Funeral Procession of Roses” is a direct reference to the beginning of “Un Chien Andalou”: tribute paid to the famous scene from Buñuel, also creative re-enactment, also shifting the sense of it toward new territory, toward Buñuel encountering Aeschylus and Sophocles on a street in Tokyo among busy passers-by.

It’s not a movie for the sissies, this “Funeral Procession of Roses”. It acts on multiple strata, and each strata is challenging. A movie solidly placed in the underground culture, exploring the gay universe – a night club of sorts with two drag queens in bitter conflict, the club owner trying to keep the balance between them. All this approached with a raw Neorealist eye, à la Fellini, à la Juan Antonio Bardem. Over the plot comes a documentary, every now and then the action is stopped and one or other of the actors is interviewed: a movie about trans genders, played by trans genders, how do they view their sexual condition, how do they relate with the movie they play in. Is it a documentary about a gay movie on the making? Is it just a documentary about the LGBT condition, using feature sequences to emphasize some points? Actually everything in the movie is left in an indeterminate state, and this is on purpose. Is it a feature or a documentary? Are the actors playing actors, a movie within a movie? Are those guys trans genders, or girls impersonating trans genders, or what? Is the paradigm of Oedipus (re-enacted in the movie in a quirky way) just what we know it is? Is this a supremely iconoclastic interpretation of Augusto Monterosso’s “La cucaracha soñadora” – moved in a Tokyo gay bar of the sixties? (“There was a cockroach named Gregor Samsa who was dreaming he was a cockroach named Franz Kafka who was dreaming he was an author writing some story about a clerk named Gregor Samsa who was dreaming he was a cockroach”). Gosh, no!

And I think this is the ultimate meaning of the Funeral Procession of Roses: it speaks us about the frailty of our certitudes: be it reality versus illusion of reality, be it gender strict determination, be it our ultimate identity. “Mis circunstancias son como las suyas. Ésa es una de las razones”… Yep, not for the sissies. 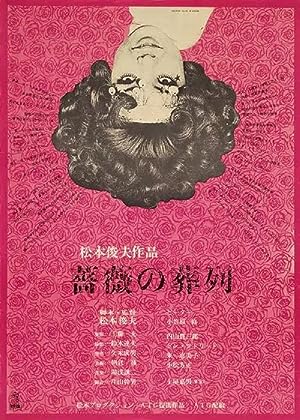