Two seemingly well-educated young men, who call each other Paul and Peter among other names, approach a family on vacation. They are, apparently, friends of the neighbors, and, at the beginning, their true intentions are not known, but soon, the family is imprisoned and tortured in its own house violently, which the viewers are forced mostly to imagine and to share a certain complicity with the criminals. It might be some kind of game with the lives of husband, wife, son, and dog, but why are they doing it?

This is one of those I nearly didn’t watch (I thought it would be pseudo-intellectual drivel about the evil nature of video games) – I’m very glad I got over myself and finally did watch it one day. What an amazingly done film! I’ve never seen such great acting in a German language movie (the film is Austrian – just to be precise); the script is full of surprises and the whole film has a tightness that is very rare; every little detail is in the right place.

Michael Haneke always likes to challenge his audience, but even among his more controversial films ‘Funny Games’ stands out. The story follows the logic of a nightmare; uneasy tension gives way to unreal horror as you stare in disbelief at what’s happening on screen. This is one of the most gripping films about the dark side of human nature I have ever seen; pure cinematic entertainment and yet it goes beyond that (and stays with you long after you’ve finished watching). 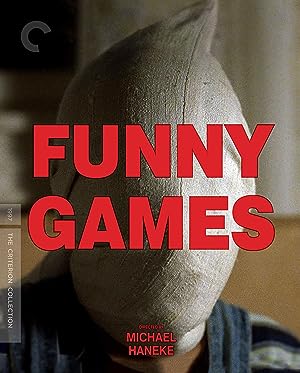