It’s mid 19th century, north of France. The story of a coal miner’s town. They are exploited by the mine’s owner. One day the decide to go on strike, and then the authorities repress them.

“Germinal” is a vivid, colorful, eloquent rendering of how the life of mine workers was in Europe in late 19th century. It is also a powerful illustration of how a strike could come about in that time, and how difficult – almost hopeless – it could seem for those dirt-poor people to try and improve their miserable life conditions. Of course, the contrast with the bourgeoisie is striking and thought-provoking. Depardieu (as Maheu) is, as usual, a giant figure, and most other actors are also very convincing. One question that remains when you saw it all is : can you really change a society’s deep, unfair structure without violence? 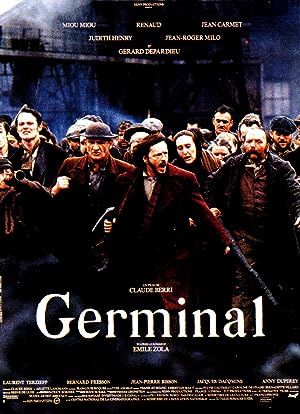