An eighteen-year-old boy gets a summer job in a nursing home and develops a deep emotional attachment to an old man. Discovering that the old man, along with the other patients, is being over-medicated to make him easier to manage, the boy weans the old man off his meds and helps him escape, resulting in a road trip across the country.

Bruce LaBruce’s ‘Gerontophilia’ exists on one level as a bold and thoughtful exposxc3xa9 of the shocking treatment of geriatrics in some care homes, whereby they pass their days under heavy sedation so as to make them less of a problem to handle. Though well-scripted and acted, this theme is hardly novel, having been seen in many earlier films, including Henry Koster’s delightful mixture of the tragic and comic in ‘Mr Belvedere Rings The Bell’. What makes ‘Gerontophilia’ unique is its other level – an unusual account of the developing relationship between the octogenarian Mr Peabody (Walter Borden in a complex and completely convincing performance) and a youthful student, Lake, who decides to intervene and improve Peabody’s quality of life. This decision is not, however, completely altruistic since Lake is one of that minority of young males who are turned on sexually by old men. It is to LaBruce’s great credit that he treats this controversial subject with just the right amount of restraint, avoiding the lurid, but not being afraid to call a spade a spade. There are no actual lovemaking scenes in bed, but sufficient moments where Lake’s attraction to old flesh is made manifest, at the film’s ending through the medium of humour, earlier in a poignant scene where Lake sketches Peabody with, as one might say, no holds barred. The film of course has its flaws: Pier-Gabriel Lajoie as Lake is just too impossibly good-looking, though this is to some extent offset by the charisma of his performance and his unerring sense of fun. Also there’s the suggestion, inferred rather than stated, that his curious sexual preferences stem from his relationship with his drunken mother, but this comes over as a trite rather than illuminating idea. These, however, are small matters. This movie is a charming and unpredictable insight into a sub-world which is not just French-Canadian but universal, and will be a welcome addition to the programmes of those art cinemas brave enough to show it. 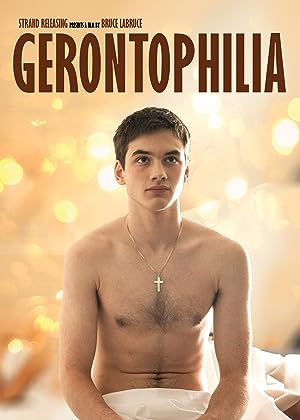