After his mother’s death, 17-year-old Sven moves in with his dad Achim, a taxi driver, who had divorced his mother several years earlier. It is not easy for Achim to get used to an adolescent around the house, especially since Sven hardly speaks to him. But Sven does well in school, and Achim hopes that time will bring them closer together. It is Achim’s girlfriend Julia who first senses that something is wrong with Sven. Why, she wonders, does he always hang around with young boys? Why does not he have any friends his own age? She suspects that he is gay. The truth, however, is somewhat more nuanced – and chilling: Sven has pedophile tendencies. Proof is soon found on videos that shock and sicken Achim. Sven himself is shattered and regrets his actions. Julia suggests therapy, but Achim is convinced that he and Sven can handle this together. But he is wrong. Though Sven practically begs his father to lock him up in his room, Achim has confidence in his son – a confidence that soon turns out to be ill placed…

Fischer’s film tackles on a most controversial theme. However, this is not about “shock value”; there is no feasting on images of strong content, quite the opposite, in fact. Here, what matters most is the consequence of relationships of a sexual nature between a 17-year-old and a 11-year-old. As the film starts one’s attention could meander randomly; however, Guter Junge’s superb music selection conveys a dense and somewhat gloomy atmosphere that anticipates conflicts.

Sven is a 17 years old boy that hangs out with younger kids. His mother has passed away recently and one can’t help but to feel compassion towards him when he stares sadly at his mother’s photography. Soon, Sven’s father is uneasy about his son’s lack of interest in girls.

Is Sven a byproduct of contemporary society? After all, as consumers, don’t we always demand fresh and young looking top-models? Isn’t anorexia in young women a way to avoid the aging process (through starvation the menstruation cycle stops, thus creating in anorexic girls a false sense of childhood)? Don’t we value youth to the extreme? Are we not obsessed with exercise and lifting and botox and so on so that we may never look old? I cannot answer these questions but I can suggest something: today age is an anathema.

Sven is about to reach the threshold of adulthood but he refuses to cross it. Like an anorexic girl, he lingers to childhood: he shaves his legs and armpits; he desperately tries to get rid of the evidence of time, of age. When he admits to his progenitor that he has no interest in turning 18, the man emphasizes that he, as a father, wants him to turn 18. It is the desire of the other.

But why is this important? Jacques Lacan explains that desire is psychically invested in an “object a” (Objet Petit). The function of the ‘object a’ goes through a phantasm, id est, a Phantasmatic dynamic that reinforces fantasy (this includes not only sexual fantasies but all sorts of fantasy as well).

The encounter of the subject with the other’s desire is a traumatic event; that other is structurally incapable of guaranteeing Jouissance. The Jouissance ignites the construction of the phantasm as a veil that hides what the ‘other’ lacks. Nevertheless, desire is intersubjective, which means that there is a need for the other.

There is a scene in Gay’s Krampack in which two boys discuss the possibility of engaging in sexual intercourse with two girls. One of them says that they shouldn’t do anything because the girls have not reached the age of majority and the other one replies that neither have they (quick translation): “we’re underage too, that means we can have sex with whomever we want”. Sheer adolescent naiveté or plain hormonal horniness? In the film, Patrick, a younger boy, gets very close to Sven. In fact, in some moments, Patrick seeks him out fully aware of the possible risks. Is there a gray area here? If the offender is underage… doesn’t that become an extenuating circumstance? Does the nature of crime depend only on jurisdiction? Patrick publicly accuses Sven of “crossing a line” in one occasion, only to knock at his door on the next one.

Is Patrick the Objet Petit? If the ‘Object a’ is absent it reinforces the function of the signifier (without absence there would be no signifier); on the other hand, if the object a’s presence is real then anxiety ensues. Lacking a place in the symbolic, the object a manifests in structural fissures, always within a phantasmatic code. That’s why Sven gets nervous when Patrick is around and tells him to go away, only to feel saddened by his absence afterwards. Paraphrasing Lillian Ferrari’s interpretation of Lacan if one considers the real as object a, then we’re talking about a remainder that escapes symbolization, and as such an element heterogeneous to the signifier (which belongs to the subjective structure). The question of the other’s desire is inextricably linked to its ethical dimension insofar as the object a bears the possibility of alterity, of real otherness. When Sven finds himself exscinded is because there is no place for him in the symbolic order, id est, in society. But at the same time, the elusive nature of the object a forces him to continually prey on young boys, until only one outcome is possible. 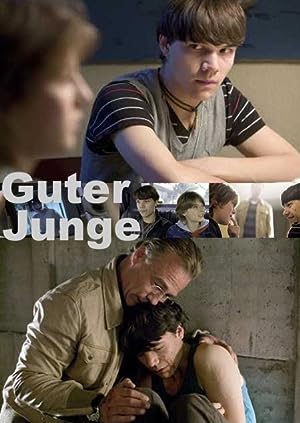 A Good Boy (2008)
90 min|Drama|09 Apr 2008
7.1Rating: 7.1 / 10 from 224 users
After his mother's death, 17-year-old Sven moves in with his dad Achim, a taxi driver, who had divorced his mother several years earlier. It is not easy for Achim to get used to an …
Director: Torsten C. Fischer
Creator: Karl-Heinz Käfer (screenplay)
Actors: Klaus J. Behrendt, Sebastian Urzendowsky, Gabriela Maria Schmeide, Martin Brambach