Young adult Harold Chasen, solitary and friendless by choice, is obsessed with death, this fascination manifesting itself in he staging his own fake suicides, driving a hearse, and attending funerals, even of people he doesn’t know, all to the chagrin of his exasperated wealthy mother with who he lives. Mrs. Chasen is determined for Harold to be “normal”, including she sending him into therapy to deal with his issues and finding him a girlfriend through a computer dating service. It is at a series of funerals that Harold meets Maude, on the cusp of her eightieth birthday, she who too attends funerals of strangers. Unlike Harold, Maude is obsessed with life – her own life to be more precise – she doing whatever she wants to please herself, damned what others may think or how they may be affected. Since she can’t take material possessions with her, she is more interested in experiences, with whatever material possessions she has – often “borrowed” without asking – only to further those experiences. Their friendship is initially based on how the other can further their own priority. But as Maude shows Harold how to truly live, Harold falls in love with her. Their relationship, already limited in time by the sheer math, is curtailed even more as Maude shows him only not how to live well, but die well.

This art house favorite is a timeless classic and recommended viewing for all post-Catcher In the Rye teenagers. To modern viewers, the Ruth Gordon creation of Maude probably seems trite, but her Maude was fresh, original and daring in 1970 and the pre-Sophie’s Choice twist in her history that Harold discovers was likewise unanticipated by early viewers. Unfortunately, Ruth Gordon went on to recreate this character in lesser films throughout that decade and the character of the eccentric old lady has become rather shopworn.

The Cat Stevens soundtrack is probably one of the most effective use of pop music in film ever. 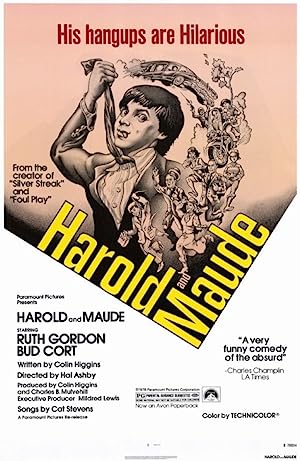 Be the first to review “Harold and Maude 1971” Cancel reply