Love is the Word is a moving, romantic and funny coming-of-age drama about the magic of first love and the misery of first lost, set in 1978: the year ‘Grease’ hit the big screen.

“Hemel op Aarde” (“Heaven on Earth”) is a Belgian-Dutch co-production directed by Pieter Kuijpers. It’s set in the late 1970s and manages very well to achieve that look—something that is actually pretty rare in period films. The hair is right, the clothes are spot on and even the garish flowers stuck on sliding patio doors are true to the period—something retired history teachers like me appreciate.

The story is about a very pious young man named Bart (Bram van Schie). He’s an alter boy in the local church and tries very hard to please God as well as others. However, when a new family comes to town, his faith is challenged. Not only does the Verheije family not attend church but they represent temptation to Bart. The Verheije boy is about Bart’s age (about 13) and for much of the film you think the movie is about this pair and the negative influence the new boy has on Bart. They get into some trouble and Bart’s good-boy image is severely tarnished. However, the story ends up being about the older sister, Moniek (Ella-June Henrard)—a very attractive teen who inexplicably likes Bart…A LOT! However, their relationship has some serious hurdles—but to learn more about this, watch the film.

The main theme in this film might easily offend some viewers. This movie could easily be interpreted as an anti-religious film, as the Catholics in this film either are legalistic jerks or are folks who eventually lose their faith and see through their hypocritical friends. And, the atheists are pretty likable folks by comparison. Or, just as easily you could see the film as a picture not so much against organized religion but against religion without love and which is therefore completely inundated with rules. However, whether or not the themes make you feel uncomfortable, this doesn’t change the fact that it’s a very well made film. The acting is quite good—something you don’t always see in films starring kids or teens. The same can be said for the direction and script—they are very good as well. I would also give special mention to the makeup artists for this movie—they really did a great job with Moniek and that’s something you’ll just need to see for yourself with this film.

My only misgivings about this film are the same I have for any subtitled movie—that people won’t see it simply because it’s not in their native language. It’s a shame, really, as there are MANY wonderful films out there waiting to be discovered that are in a wide variety of languages and you’ll really be missing out if you only watch non-subtitled films. Give this one a try—it’s pretty good.

A final note—the summary on IMDb talks about the film “Grease”. Well, this really has very, very little to do with the plot here in “Himel op Aarde”—it’s just set around the same time period when this Hollywood film was released. 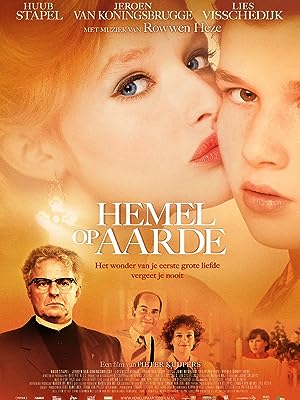