HENRY GAMBLE’S BIRTHDAY PARTY takes place over the course of 24 hours, at the 17th birthday pool party of preacher’s kid Henry Gamble. As Henry treads through various sexual possibilities, seeking to come into his own, so too do the adults and teenagers of the party, all struggling to navigate the public and private, and their longing, despite themselves and their faith, for earthly love.

We first see Henry Gamble (Cole Doman) on the eve of his seventeenth birthday having a sleepover with Gabe (Joe Keery), a best friend. They’re two handsome young men talking about girls, though it’s clear Henry has unrequited and unspoken feelings for Gabe. “What would you do if she was here?” Henry asks, getting his buddy to describe a sexy fantasy, deriving far more pleasure from the boy speaking than the images he’s conjuring. After flushed with adolescent urges jerked around, Gabe, unaware of his friend’s crush, turns and recommends he try listening to more Christian rock. Then Henry prays before falling asleep. Immediately Henry Gamble’s Birthday Party sets itself up to sit squarely in liminal spaces, in the quiet compromises and contradictions in its characters lives. And yet it does so without judging or condescending. Here’s a wholly emphatic, beautifully contained drama about Christianity and sexuality that doesn’t fall into easy moralizing or obvious stereotypes. It’s too quiet and tender to hit any loud false notes. 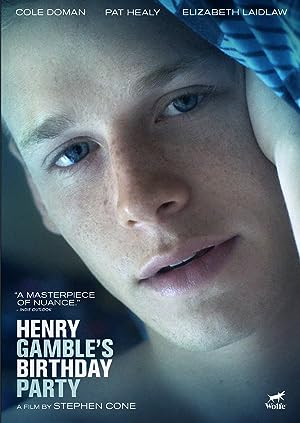