Honey and the Pig 2005 with English Subtitles

Manos returns to his hometown where he finds his children love and starts a chain of events that leads to the uncovering of a dark secret.

Olga Malea’s new comedy raised quite a ruckus when it opened in Athens, offending many people with its comedic framing of a hunt for a pedophile. The comedy actually opens up the characters of people surrounding the molester and creates a sense of humanity and depth without in any way excusing the crime. In fact, as it unfolds, some of the zaniness that builds the comedy is revealed as having more purpose and hidden depth than is apparent at first.

The romantic leads, Hristos Loulis and Faye Xila, are very engaging and sexy, he in a very sweet, vulnerable, natural way, she as a comedic over-sexed goth working as an undertaker’s assistant. The funereal aspect is a bit of a cross between “Six Feet Under” and the old Keystone Kop farces, but part of the charm of the comically disastrous events surrounding the funerals is the insight into Greek customs, especially as they are being complicated by modernization. 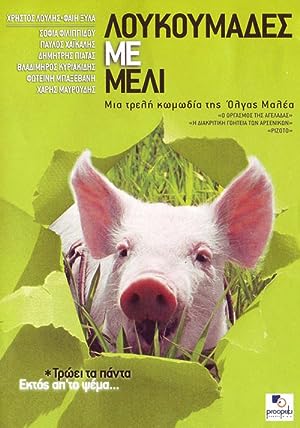 1 review for Honey and the Pig 2005 with English Subtitles