Jack an 18-year old hustler and his boyfriend Tom are an item, close and very much in love. Otherwise, Jack is impulsive and explosive with few redeeming qualities. Matt, a married man, who hasn’t come out of the closet takes Jack from NYC to Miami with the intention of helping him.

In this his big screen directorial debut, Director/Writer Max Emerson (who is also an actor ” Glee,” ” The Real O’Neals”) unfortunately relishes in presenting exaggerated gay character stereotypes, fights ongoing sound issues, and can’t reign in his main characters dialogue. This is too bad, because the story of hustler Jake (played nicely by attractive newcomer Conor Donnally) and his on-the-run boyfriend Tom (the shy Sean Ormond “50K” 2018) has the makings of an intriguing gay storyline. Set against a New York/South Beach backdrop, Jake hooks up with married closeted man Ken (the handsome Terrance Murphy “Burn Notice” TV), who whisks him off to Florida for the weekend, while his wife Jess (the terrific Katie McClellan “The Ultimate Legacy” 2015) sits at home with their baby. Seeing the excursion as a chance for him and Tom to leave their crowded NY hostel, Jake goes all in. When things don’t turn out as planned, he picks up his craft in South Beach, coming face to face with psycho client Date-Rape-Dan (played superbly by Jay Alan Christianson “Black-ish” TV). Emerson has all the makings a plausible story, however, wearing too many hats, he was unable to see the excessive dialogue, nor help his actors who needed a little directorial assistance. You won’t be “hooked” on “Hooked,” but you also won’t be disappointed. 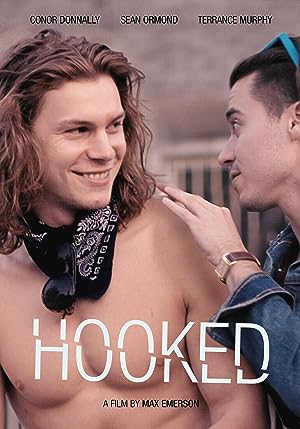 Be the first to review “Hooked 2017” Cancel reply