A glamorous, colourful coming-of-age story that follows the dramatic journey of Frank, a high school kid in 1984, through an exciting world of sex and music, where his deep new passion is suddenly turned into a struggle for courage facing a new disease – the “gay cancer” – and becomes deep, true love in the expectancy of his friend’s horrible death and beyond.

Some viewers, unfortunately, will pass on this film as the cover of the DVD makes it appear to be a gay sexploitation waste of time. It is anything but that. Written and directed by Jean- Claude Schlim (with assistance from Christian Thiry and Robert David Graham) this is one of the finest films about the early days of the AIDS pandemic and long with ‘Longtime Companion’ is probably one of the more important films for the public to understand the inception of the disease that still hovers darkly over the globe. The cast is rich in talent and the method of unfolding the story is superb.

In opening credits we see an apparent carefree young lad running through sunlit cornfields – perhaps reference the path to Oz: where that goes is revealed at the end of the film. It is 1984 and a gay high school lad Frank (Layke Anderson) escapes his rigid parents by moving to Amsterdam where he lands a job as a bar boy in a gay dance club, the House of Boys run by a man referred to as Madame (Ugo Kier) who keeps everyone in tow as well as performing in drag on stage. Frank is assigned a room with a straight boy Jake 9Benn Northover) who is the club’s most popular dancer and who makes considerable money participating in passive physical gratification for the gentlemen who frequent the club. Jake has a girlfriend who sneaks in through the window of their room at night for trysts with Jake: Frank must then move in with transgender Angelo (Steven Webb) and raunchy mohawked dancer Herman (Oliver Hoare) for the night. Frank is talented and wants to leave his job at the bar where he assists the gentle lovely Emma (Eleanor David) and become a dancer. In the meantime Frank has fallen in love with the unattainable straight Jake but the two become close friends. Jake has been saving his money as a dancer and as an escort to run away with his girlfriend, but when his savings go missing he realizes his girlfriend has taken the money to abort Jake’s baby. Jake is decimated by this but at the same time he leans on Frank for succor. The two boys realize their friendship has turned to being lovers. Jake introduces Frank to his way with clients and in the process falls through a glass tabletop sustaining cuts the require sutures. Frank takes Jake to the hospital where they encounter Dr. Marsh (Stephen Fry) who ultimately discovers that Jake has no T cells – and the mystery and cruel head of AIDS arises. Jake is fired form the club by Madame who fears for the reputation of this new plague and Frank and Jake move in together, compliments of Emma. From this point Jake has obvious Kaposi’s sarcoma and the rest of the film is how Frank and the friends of the club are supportive. The unique aspect of the story is that it is the straight boy receiving passive sex from clients is the one who becomes infected. The beginning of the film is repeated with the full story at the end.

This story could have easily been melodrama but the manner in which the story is handled and the fine acting on the part of the actors involved allows it to rise into the realm of very significant films. It copes with tragedy but it also emphasizes the honest meaning of love in all forms. Highly recommended. 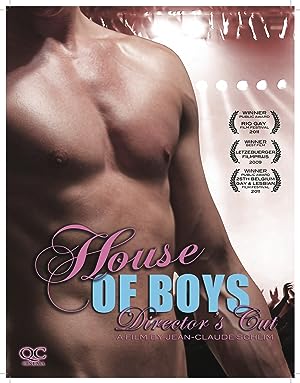 Be the first to review “House of Boys 2009” Cancel reply