Between working full-time, raising a young son, and trying to maintain a relationship with her detached husband, James, Lauren Bell desperately needs some help in watching her newborn, Riley. Thinking she’s found the perfect solution, she hires her neighbor, Owen, to be their nanny. Owen is exactly what the Bells need and Lauren couldn’t be happier. It isn’t long, though, until Owen crosses the boundaries between hired help and man of the house. He begins spying on Lauren and drives a wedge between Lauren and James’ already fragile marriage. As his unhealthy obsession with Riley and Lauren continues to grow, it’s clear that he will stop at nothing to make sure his new family stays together forever.

“Nanny Nightmare” (was “Nightmare Nanny” taken already?) is yet another story about an ordinary suburban couple who find themselves terrorized by a nanny (a male this time — a “manny,” to use the horrible term that actually appears in Brian McAuley’s script), though this time there are a few interesting wrinkles. The couple are James (Brady Smith) and Lauren (Erin Cahill) Bell, though James’s job has consumed so much of his time he’s hardly ever home and indeed the couple have formally separated, though James is still living on their property in the guest house. Lauren suspects that James isn’t just working those late nights, especially since his assistant is gorgeous young red-headed woman Summer (Elyse Dufour), who when we see them together looks upon him with such goop-eyed admiration it’s clear she wants considerably more than just a working relationship with him. James and Lauren have two children, teenage boy Carter (Tyler Huth) and baby Riley (Oaklyn White), who was conceived in vitro. The “manny” — though it’s clear he’s a good deal more than that — is Owen Leary (Jake Manley), a young man of almost unearthly beauty (and director Brian Herzlinger exploited that by giving us quite a few luscious shots of him topless, including one in which he clandestinely photographs Summer in bed while himself wearing nothing but blue underpants — yum!) who was formerly a neighbor of James and Lauren — indeed, Lauren remembers baby-sitting him years before.

Owen shows up and in the manner of Lifetime’s villains immediately makes himself useful, fixing the house’s front door and dryer — things James had been promising to do but hadn’t got around to — wiring a video “nanny cam” in baby Riley’s bedroom to go along with the audio system Lauren already had in there (the assumption behind McAuley’s script seems to be that any truly responsible parents bug their kids and spy on them 24/7) and, unbeknownst to our lead couple, planting video devices in the rest of the house and wiring them so he can spy on them on a bank of three computer monitors in his own home. Owen ostensibly lives alone with his mother Beth and is also an aspiring musician, though the only evidence of that we actually hear is a few power chords he plays while ostensibly giving Carter guitar lessons, though he tells James and Lauren that it’s because he’s an aspiring musician that he’s had to have so many different kinds of jobs he can do just about anything for them they need. In any event, Owen’s obsession with Lauren leads him to do all manner of things, including cruise Summer in a bar, get himself invited back to her place, and when she’s asleep he shoots cell-phone photos of her in her underwear and, with his skills as a computer hacker, plants the pics on James’ phone and leads Lauren to demand he leave the guest house and take his carcass somewhere else. (Quite a few Lifetime movies feature actually or hypothetically cuckolded-on wives peremptorily throwing out their straying husbands instead of sticking it out and fighting for them.)

“Nanny Nightmare” is actually a pretty good Lifetime movie, helped not only by Jake Manley’s gorgeousness but Herzlinger’s skillfully Gothic direction — the last 20 minutes or so look almost like a horror film — even though the script is the usual Lifetime silliness (I’ve seen McAuley’s name on quite a few of these Lifetime entertainments before) and aside from Manley’s relatively understated performance as the psycho, it isn’t acted particularly well either, though I give Tyler Huth points as Carter for making it believable that at times he’d welcome Owen as a sort of older brother, and at other times he’d just be revolted by him and his smarmy act — in essence he’s the equivalent of Thelma Ritter’s character in “All About Eve,” on to the slimeball before anyone else in the dramatis personae. 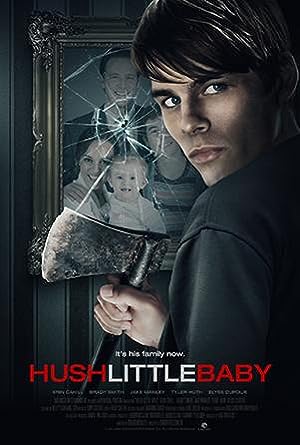 Be the first to review “Hush Little Baby 2017” Cancel reply