After being shot while calling for help trying to stop a violent attack on his high school girl, a 16 year old boy awakens from a coma to discover that fragments of his smart phone have embedded in his brain, giving him superhero powers. He uses this knowledge and technology to exact revenge on the gang responsible for the attack.

The biggest mistake you can make going into iBoy is expecting something from the Marvel catalog.

Cause that is simply not going to happen.

Instead what you get is a solid Brit “estate gang” story (like Harry Brown 2009 or a dozen others you could probably recite from memory) with some Marvel/Spiderman superhero stuff cleverly thrown in.

And that is a mouthful because I have watched and reviewed a lot of films (check out my list, about 1300) and have never seen anything quite like this before.

Does it work? For the most part, YES. There are some pacing issues here and there, and it takes a while for the young lead to develop a character arc that the audience is comfortable with, but the suspense/payoff is rock-solid and nail-biting; and the close is edgy but respectful and optimistic.

The two best performances come from supporting actors — another oddity.

Maisie Williams steals every scene not otherwise nailed down and does so with a sweetness of character that makes you wish you knew someone like her when you were in school.

And Rory Kinnear as the arch-villain almost but not quite moves into the rarefied air of a Bond film — you keep waiting for him to say “WHAT DO I WANT IBOY, I WANT YOU TO DIE” — but shows enough restraint to keep from falling over the edge.

In short, given the brilliant idea, the solid execution and its ability to keep the viewer both offguard and entertained at the same time, this a fun flick deserving of a higher IMDb score than I am seeing. 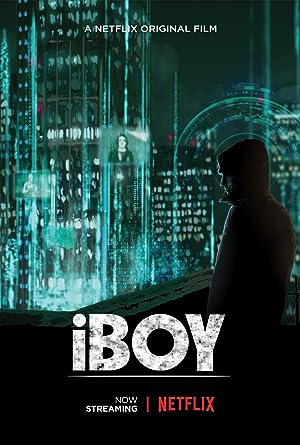 iBoy (2017)
90 min|Action, Crime, Sci-Fi, Thriller|27 Jan 2017
6.0Rating: 6.0 / 10 from 16,199 users
After being shot, Tom wakes from a coma to discover that fragments of his smart phone have been embedded in his head, and worse, that returning to normal teenage life is impossible because he has developed a strange set of superpowers.
Director: Adam Randall
Creator: Joe Barton (screenplay), Joe Barton, Kevin Brooks (based on the novel by), Mark Denton, Jonny Stockwood
Actors: Bill Milner, Maisie Williams, Miranda Richardson, Rory Kinnear

Be the first to review “iBoy 2017” Cancel reply