Seventeen-year-old Alex Taylor dreams of running for his high school’s cross-country team, a dream that’s a bit out of reach for this gifted runner as Alex has been blind since the age of two. Determined to run, he practices with his father, Probation Officer Geoff Taylor. Geoff, with additional girth and age working against him, finds he no longer can keep up with his son. He must find a running partner at the school who’s fast enough to help Alex make the cross-country team. This help comes from the unlikeliest of sources. Brad Coleman, a schoolmate of Alex’s, spends most of his time running from the law. Caught in a pathetic daytime robbery attempt, Brad faces incarceration for repeat offenses. To keep Brad out of jail and in school, Geoff makes a deal and pairs the two boys, opposite in many ways. Despite a rocky start over their many differences, an unlikely friendship forms.

Motion Picture Rating (MPAA)
Rated PG for thematic elements including bullying, and for language and some suggestive material

If I had Wings is a family film about a blind kid who wants to be a runner but needs a running partner. He teams up with a troubled youth in a bid to win a race.

To get the negatives out the way first this is a film we have seen a million times before, the troubled kid with a good heart, the bad guy Jock, the standard family film plot template.

For all it’s predictability this still manages to be a very enjoyable and well above average film of its genre. This is mainly due to an excellent cast who all do a good job with the script they have. In particular Jaren Brandt Bartlett who is superb as the charismatic bad boy turned good.

The film is fast paced and flows well and there are some well executed laughs to be had along with the drama had as well. This is a film that can be enjoyed by all the family, a pretty rare occurrence these days. Highly recommended. 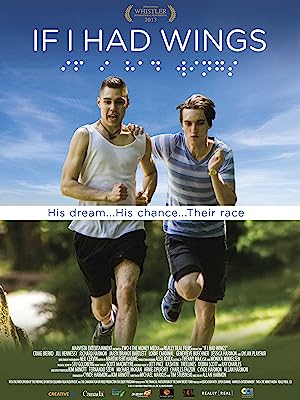