I’m Glad My Mother Is Alive 2009 with English Subtitles

Given up for adoption as a toddler, troubled teenager Thomas becomes obsessed with tracking down his birth mother. After years of searching, Thomas finds her single, with a small child, living in a nearby suburb and begins a relationship with her which slowly drives him to an act of madness.

I’M GLAD MY MOTHER IS ALIVE (Je suis heureux que ma mère soit vivante) is a deeply disturbing film based on a true story that explores the spectrum of adoption and the effects on the children placed for adoption, the biologic mother and the adoptive parents. It goes places other films on the subject have dared not go, and since this is based on a true incident it is another example of fact being stranger than fiction. The film was made in 2009 by the father/son duo Claude and Nathan Miller, based on the story as written by Emmanuel Carrère and adapted for the screen by Alain Le Henry and both the Millers.

We meet Thomas Jouvet (a splendid performance by Vincent Rottiers) at age 20, riding the train, his face reflecting that of a troubled young man. Through a series of at times confusing flashbacks we learn that Thomas was given up for adoption as a toddler, or as he sees it ‘abandoned by his mother’, and as a misguided lad he becomes obsessed with tracking down his birth mother. The flashbacks begin with the adoptive parents Yves (Yves Verhoeven) and Annie (Christine Citti) on holiday with Thomas and his younger brother Patrick/François at ages twelve and nine. The adoptive parents are frequently at odds with Thomas who is an obstreperous child, acting out his feelings of disturbed behaviors with not being truly wanted. Further flashbacks show scenes of the brothers with their birth mother Julie (Sophie Cattani) and the day she signs off on their adoption at a foster care center. Thomas is four at time of adoption, his brother one. At twelve, Thomas Jouvet (Maxime Renard) is obsessed with finding his birth mother and blames his adoptive parents for failing to inform him about her. Thomas is determined to find his birth mother and manages to persuade a registry office worker to reveal his mother’s name and address. He finds his mother, Julie, but when Julie opens the door, very pregnant, she doesn’t recognize the twelve year old Thomas and Thomas flees. His adoptive parents are unable to cope with Thomas and it is suggested that Thomas’ combative behavior is part of the etiology of Yves’ depression – an illness that eventually leads to Yves’ being institutionalized.One day he looks up Julie, arriving with flowers and chocolates. She is still in the same flat but now alone with her young child.A strange relationship develops in which Thomas seems to see Julie partly as his long-lost mom, partly as a potential girlfriend, a relationship with her which slowly drives him to an act of madness. Time moves forward eight years and Julie, the birth mother, now with a eight year old son Frédéric (Quentin Gonzalez), softens and Thomas, now twenty and working as a garage mechanic and with his own car seems finally on the right track, and is a loving member of his adoptive family, sharing in visits to Yves. François (now Olivier Guéritée), at seventeen doesn’t remember Julie and is far more interested in chasing girls than in his birth/adoptive background. Thomas remains a loner. From here for a while Thomas leads a double life, halfway moving in with Julie and her child, and halfway still the son of Annie, going back and forth, lying to Annie about another job and a girlfriend. Eventually the confused and tortured life of Thomas ends up in a very unsuspected way – an incident occurs but it is not as it appears, and the results provide a very surprising ending to this strange but very true tale.

Watching this film, discovering the reason for the choice of title, takes some patience on the part of the viewer. The non-linear aspect of the story is often distracting but in the end it seems to have been the only way to allow us to understand the motivation of Thomas and the odd ending. Vincent Rottiers is exceptional as the very disturbed and desperately needy Thomas and the final scenes between Thomas and Julie are exceptionally touching. The film is in French with excellent English subtitles. This is a strong cinematic art piece about a subject that needs exploration. Despite the minor flaws in the picture it is well worth the viewer’s time. 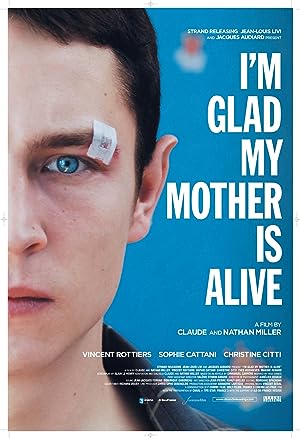