Jonas is already head of the family at just 12 years of age. He has been helping his two younger siblings and supporting his mother, Sabine, since his father left. Sabine is very loving towards her children but she often loses her patience and disappears into her room for the day. Mysterious demons drive her to spend a weekend away to relax in the “sunny valley”. But the weekend grows into weeks in which the three children hear nothing from their mother. Food and money have long since run out, the house has become more and more like a haunted castle: a spiderweb house. Jonas tries his best to maintain the appearance of an intact family. On the hunt for something to eat, he meets a young man, Felix Count of Gütersloh, who speaks in rhymes and declares himself to be not quite right in the head. Rather like a guardian angel, he takes Jonas under his wing and shows him how to get by in a world without adults. The film is less a social drama than a modern-day fairy tale shot in black and white. The audience is immersed in the eerily beautiful world of the children which unfolds its own particular magic.

Childhood tends to be portrayed sentimentally – an understandable outcome when authors and filmmakers (and advertisers) want to show the innocence and imagination of a period interrupted by adulthood.

Im Spinnwebhaus, a new film by Mara Eibl-Eibesfeldt, takes another approach to this idea by way of fairy tales. When his mother departs suddenly, needing respite from her mental “demons”, Jonas is left to care for his younger siblings, Nick and Miechen. As their mother’s weekend absence drags into weeks and money and food dwindle, the house becomes a cave of childhood fantasy: bugs as pets, bed sheets for walls and a roof covered in spiderwebs.

This while-the-parents-are-away concept is promising in a drama, especially one that chooses to focus on the burden of care-giving that befalls Jonas, rather than the parental neglect that left him there. As in the recent film Boyhood, viewers bring an adult awareness to the perspective of the primary characters, the children.

When we see Jonas’s mother locking herself in her bedroom or his absent father’s gentle detachment, viewer frustration is tempered by the children’s ignorance. It makes for an occasionally dizzying dynamic and the film comes into its own when the children are left alone and viewers’ responses feel less “managed”.

Ben Litwinschuh gives full range to Jonas’s conflicting feelings about his new position as head of the family: his desire for freedom, his need to be cared for and his anxiety when neither of these wishes is granted. All the children, for that matter, are able and natural actors, each embodying their characters with a distinct personality. Nick is rowdy but well-meaning and Miechen, the youngest, the most prone to fantasy.

Im Spinnwebhaus is a delicately crafted, languid film with a sensibility that is moving and puzzling in equal measures. Shot in black and white, the film veers between campy and creepy – from high nostalgia montages of the kids riding their bikes and playing in the forest to beautifully arranged scenes showing their overrun “spider house”. It succeeds most when it seems at ease in the middle of this spectrum, allowing the imagination of the children to enter the narrative more naturally, and with it, quieter sentiments about childhood. 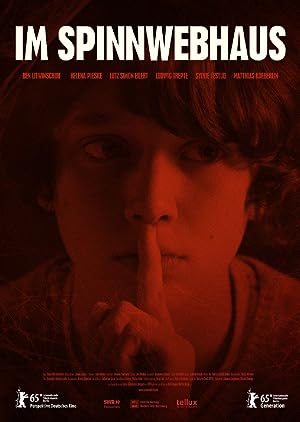 Im Spinnwebhaus (2015)
90 min|Drama, Fantasy|31 Mar 2016
6.2Rating: 6.2 / 10 from 148 users
12-year-old Jonas takes on the responsibility for his two younger siblings when their mother abandons them. Alone and isolated inside the house, they start to drift away into their own …
Director: Mara Eibl-Eibesfeldt
Creator: Johanna Stuttmann (screenplay)
Actors: Ben Litwinschuh, Lutz Simon Eilert, Helena Pieske, Ludwig Trepte