In the Name of 2013 with English Subtitles

Categories: Foreign Movies without Subtitles, Non-English with Subtitles Tags: In the Name of, tt2650642, W imie

Adam, a Catholic priest who discovered his calling as a servant of God at the relatively late age of 21, now lives in a village in rural Poland working with behavioral problem teens who fight and yell abuses. He declines the advances of a young brunette named Ewa, saying he is already spoken for; however, celibacy is not the only reason for his rejection. Adam knows he desires men and that his embrace of the priesthood has been a flight from his own sexuality. When he meets Lukasz, the strange and taciturn son of a simple rural family, Adam’s self-imposed abstinence becomes a heavy burden.

To say the least. The movie will not leave you completely after watching it. Whatever reaction it does create, it will stay with you. It’s not an easy or light theme it takes on. Therefor it had to be careful. But it is not too careful. You have scenes that are explicit in its sexual nature (even if not completely graphic).

But it is the overall feeling this movie might leave you with and the moral choices the characters are taking. It is not easy to watch at all and you might understand the characters or you might start to hate some of them too. But I can’t imagine anyone watching this, feeling nothing (even if its just disgust). The acting is really good and you get the feeling as if this is really happening (some might argue that it is close to some truth, which wouldn’t be wrong I reckon). Tough but maybe still rewarding watch 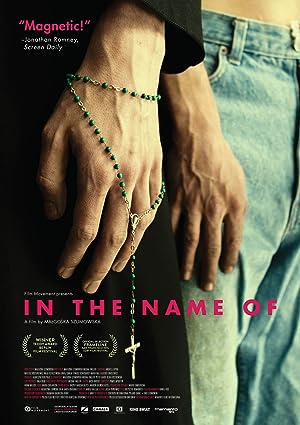 2 reviews for In the Name of 2013 with English Subtitles