In order to avoid an X rating, 40 minutes of gay S&M footage was rumored to be cut and destroyed from the 1980 film, “Cruising.” Inspired by the mythology of this controversial film, filmmakers James Franco and Travis Mathews collaborate to imagine their own lost footage. Amid the backdrop of a frenzied film set actor Val Lauren reluctantly agrees to take the lead in the film. Val is repeatedly forced to negotiate his boundaries during scenes on and “off camera,” as unsimulated gay sex happens around him. The film itself is constructed as a play with boundaries remaining queer in subject and form. As much a film about filmmaking as it is about an exploration of sexual and creative freedom, “Interior. Leather Bar.” defies easy categorization.

I like James Franco as an actor, and he seems like he’d be a cool person to hang out with. It’s James Franco the writer/director/artist/poet/musician/provocateur that’s a problem for me. Part of it is envy, I’ll admit (I wish I had freedom and funding to indulge all MY creative whims), but a larger part of it is I suspect that James Franco the Multifaceted Artist is a total poser.

“Interior. Leather Bar.” doesn’t dispel my belief that Franco is a poser, but it also re-enforces my belief that he’d be a cool friend. Val Lauren, the actor playing Al Pacino’s character from the movie “Cruising,” thinks Franco is a cool friend, Franco’s involvement the primary reason he’s agreed to participate in this project, even as his agent strongly advises him not to (his wife just wants him home in time for dinner). He seems more intrigued by playing a role originated by Pacino than Franco’s and co-director Travis Mathews’ stated thesis that the leather bars of “Cruising” represent a subculture that’s fading away as homosexuals gain greater acceptance in mainstream society. (AIDS might also have had something to do with it but I guess that’s too sad. Also: “Cruising” as a gay culture touchstone? Not sure about that.) When Lauren questions James Franco directly about why he thinks the missing 40 minutes from William Friedkin’s “Cruising” needs to be explored, Franco says something about needing to confront the world of gay leather bars to challenge fears he has only because he was raised to have them. This seems like something that could be challenged by getting a trial subscription to any one of a number of gay porn sites, or while making all the gay-themed movies he’s been a part of (“Milk,” “Howl,” “The Broken Tower”), but maybe he just wants to be sure he’s been thoroughly challenged.

But “Interior. Leather Bar.” does more meandering than challenging. Actors, both gay and straight, spend most of their time wondering what’s expected of them. Some of wonder if James Franco will be in the movie and if he will get naked (not really and no, respectively). Others wonder just how far they are expected to go. Pretty far, as it turns out: real, non-simulated sex takes place, though it barely makes up five minutes of screen time in the total ten minutes of leather bar footage. Consequently, the movie is labeled porn by some, though I don’t think it is. In fact, one sex scene seems realer than most, and you actually sense an emotional connection between the couple involved. Pretty impressive when you consider they’ve got an audience — including an Oscar-nominated actor — circling them as they get busy on a sofa. It’s not a surprise to learn immediately after that the actors are a couple off-screen. Though Lauren seems pretty shell-shocked by the action on set, he compliments the two men, telling them they appear to have a great relationship. For his part, Franco isn’t a co-director so much as the project’s instigator. Mathews does the bulk of the directing, with Franco shown leaving early, right after watching two dudes have sex. Make of that what you will.

“Interior. Leather Bar.” is presented as being the re-creation of the missing 40 minutes from “Cruising,” but it’s more like a glorified DVD extra accompanying a movie that was never finished. It’s strangely fascinating but also frustratingly pointless. 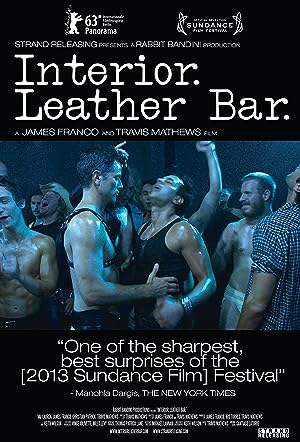 Be the first to review “Interior. Leather Bar. 2013” Cancel reply