It Happened in Europe 1948 with English Subtitles

A band of runaways and orphans of the war scour the countryside in search of food and shelter. They invade and then taken in by a musician and former concert pianist who’s hiding out in a ruined castle. After the initial altercation between them the gang accepts his guidance and he wins their respect by protecting them from the elements. However, disgruntled townsfolk want to chase away the gang who has been – in their search for survival – laying waste to their crops. A battle ensues ending in the death of a little boy – and resolution.

The script was co-written by Bxc3xa9la Balxc3xa1zs who also wrote the libretto of Bartxc3xb3k’s opera Bluebeard’s Castle. He was a renowned film theorist influencing among others Eisenstein, Pudovkin and Pabst. He also wrote the script for Leni Riefenstahl’s Blue Light. Balxc3xa1zs’s masterful cinematography is ever present in the film, but is perhaps best exemplified by the sequence with the girl and officer. Generations of Hungarians have seen and valued this movie.

It is of course no surprise that Tamas Polgar (who uses the moniker of Tomcat on IMDb and either is, or is not identical with the well known Hungarian neo-Nazi and anti-Semite with the same name and moniker) hates this movie. After all, Balxc3xa1zs was a Jew, and a Marxist Jew at that. While the film was produced by the movie company of the communist party, it was made before the party came to power. The movie was compulsory viewing for generations of Hungarian schoolchildren. Watching it again now … this frankly surprises me: a masterpiece of socialist realism it is not. Dismissing it as communist propaganda is about as useful as saying the same thing about the Ballad of a Soldier. 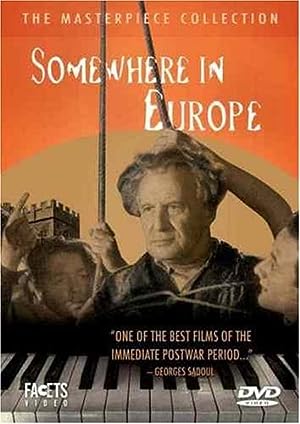 2 reviews for It Happened in Europe 1948 with English Subtitles