The Cairn’s life seems to be a harmonic family: The father Brad works as a stockbroker, his wife Abby takes care of their common new-born daughter Lily, and the 9-year-old Joshua is high-talented. But the appearances are deceptive. Joshua becomes gradual jealously, that his parents give the baby more attention than him. Therefore he begins to terrorize his family.

Obviously, this film was made with some other in mind. The homage it represents for films where kids played a key role in their unsettling plot is, to say the least, outstanding.

You’ll find out how deeply involved with “Rosemary’s Baby” it is. Or with “The Omen”. I won’t spill the beans here. You have to watch it. It’s a horrific tale. Not a horror film with all the usual gore some want to associate the genre with. This film is horrifying in many senses. And when a film really grabs you, making you think about some personal possibilities, it has accomplished it’s goal.

Joshua is a film dealing with so many things it won’t disappoint. Crude, raw and cruel, but really telling. Good remake and mix of great horror films, and a new species on its own.

Performances are pretty good. Vera Farmiga is surprisingly good, as Sam Rockwell is, too. Jacob Kogan, apart from being a very good piano player, is a believable and fearsome Joshua.

Pinpoint cinematography, good plot and a very suitable script that keeps the story rolling in ways you could expect and in some others you wouldn’t.

I can’t believe why some people walked out theatres! There’s a catch with this film for American viewers: it’s eons away from American traditional movie-making. This film resembles the character exploration of Swedish and French films. So, don’t expect a fast paced- spectacular glossy film. It will be a slooooow film for people who just want to have some time off with a popcorn film. 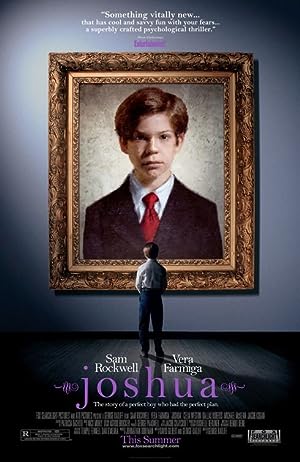 Be the first to review “Joshua 2007” Cancel reply