Keeper’n til Liverpool 2010 with English Subtitles

Jo (13) is a smart thinker with a vivid imagination, but is bothered by classmates, and is a rather hopeless soccer goalie. He does what he has to survive this difficult time in life.

I went to see this film when I by coincidence discovered that an old schoolmate of mine had done he editing/clipping job. I had seen a trailer, which I though was stupid, but since my friend is a great craftsman (e.g. behind the movie “Fritt vilt II”) I went to see this one.

From the very first scene I was captured by how intelligent the use of humor was. This is made for teenagers, especially i thought for those who spend a lot of their time playing soccer. But the case is that this is simply a well written, and great acted comedy for all. You don’t even need a family to enjoy this family-comedy.

Thirteen year old Jo is a smart thinker of a guy, and has a very vivid imagination, but is bothered by his fellow classmates, and is a rather hopeless soccer goalie. Still he tries to cope with this difficult time in life. He’s doing the homework of the “bad guy” in his class, son of a rich salesman of caravans. Jo’s mother is seeing dangers all around, being overprotective, and trying to hide her affair with the psychologist neighbor. Every kid in the street is trying to get hold of a football-card with the goalie of Liverpool. This is to kill for…

Extra kudos to both Jo and his mother Andrine Sæther. Fritjof Såheim as the football coach, and father of Jo’s best friend is once again brilliant in a role. See this, and be amused. I found myself laughing more than I can ever remember to have done in many years. And this film is not made for middle aged men. But that’s how good it is! 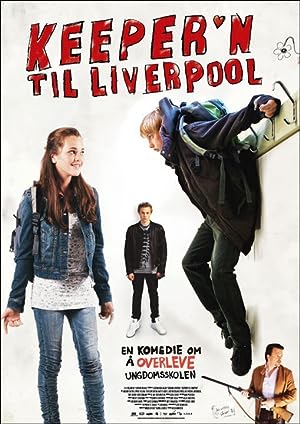 The Liverpool Goalie (2010)
90 min|Comedy|22 Oct 2010
6.7Rating: 6.7 / 10 from 756 users
Jo (13) is a smart thinker with a vivid imagination, but is bothered by classmates, and is a rather hopeless soccer goalie. He does what he has to survive this difficult time in life.
Director: Arild Andresen
Creator: Lars Gudmestad (screenplay)
Actors: Ask von der Hagen, Susanne Boucher, Jostein Brox, Mattis Sverdrup Asker

2 reviews for Keeper’n til Liverpool 2010 with English Subtitles