The year is 1984. It’s summer, and the rebellious 12-year-old girl Kid wants to stay in Gothenburg, but her mother has other plans. Kid discovers that summer vacation in Finland isn’t as bad as first feared. In a few hot weeks she discovers her dawning sexuality, and experience her first crush.

This endearing and disarmingly beautiful little gem – a particularly authentic coming-of-age masterpiece set in the 80’s Scandinavia – has just too many merits to be overlooked.

Headstrong Kirsi, a Swedish girl of Finnish minority, has won a reporter contest for Radio Gothenburg. When her widowed and estranged mother decides to spend the summer in her homeland Finland, Kirsi (who has chosen to be known as Kid Svensk) decides to take a tape recorder and make a reportage about her stay in Finland.

Soon it becomes clear that this is a summer that changes Kid’s life. First love, very subtly narrated, and the homesickness and newfound love of mum (leading her to consider never to go back to Sweden again)

inevitably renders to a collision and eventually, deeper relationship

between mother and daughter.

The picture is so terrificly shot. And what the Nordic countries are famous for in cinema: capturing the angst and perception of children, without ever looking down or becoming childish, so very well done – in fact these are serious matters.

What completely baffled me was the acting of young Mia Saarinen. She was able to totally carry this complex role of a young girl with the world on her shoulders. She’s got a killer smile. The innocent-but-intelligent way she plays with a boy’s feelings. The precociousness and totally unnaive curiosity to understand the world around her. Very well done for an eleven year-old girl.

To sum it up – we have here a beautiful film, excellently acted and narrated. Big compliments for the director, and evidently looking promising for future projects! 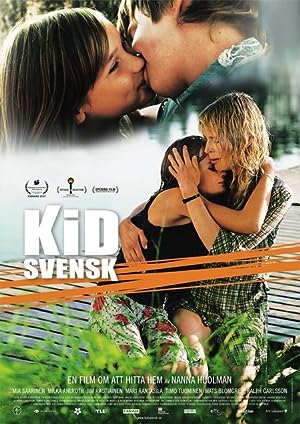