In the early 1940s, Allen Ginsberg is an English major at Columbia University, only to learn more than he bargained for. Dissatisfied by the orthodox attitudes of the school, Allen finds himself drawn to iconoclastic colleagues like Lucien Carr, William S. Burroughs and Jack Kerouac. Together, this gang would explore bold new literary ideas that would challenge the sensibilities of their time as the future Beat Generation. However, for all their creativity, their very appetites and choices lead to more serious transgressions that would mark their lives forever.

Director and co-writer (with Austin Bunn) John Krokidas have created an atmospheric visit to the beginnings of one of literary history’s great movements – the Beat Generation – and in doing so have carved a fine story that combines not only the rise of the Beats but also examines the slow emergence of recognition of sexual identity crises, in both a positive and a critical manner. Cast with a group of very fine actors and accompanied with musical director Nico Muhly’s sensitive score that includes the references to Brahms symphonies and trios and transcriptions of themes along with terrific excerpts from Harlem’s jazz scene (courtesy of Dawn Newman as a jazz singer), this film is successful on many levels, not the least of which is the reminder of the permanent impact on American literature and sociology imprinted by the likes of Allen Ginsberg, Jack Kerouac, and William Burroughs. The very sensitive opening sequence, appreciated only at film’s end, sets the dark tone of the film and opens the window to understanding the Beats (also called “the Libertine Circle” by Ginsberg).

The time is the mid 1940s and Allen Ginsberg (Daniel Radcliff) is an English major in Columbia University, assigned to be the roommate of Lucien ‘Make me cry or make me horny’ Carr (Dane DeHann) who awakens Ginsberg’s rebellious self and introduces him to the work of Rimbaud. Dissatisfied by the orthodox attitudes of the school, Ginsberg finds himself drawn to iconoclastic colleagues like the egotistical but genius Lucien Carr, William S. Burroughs (Ben Foster) and Jack Kerouac (Jack Huston). Together, this gang would explore bold new literary ideas that would challenge Columbia University’s staid stance and the sensibilities of their time as the future Beat Generation. However, for all their creativity, their very appetites and choices lead to more serious transgressions that would mark their lives forever. Lucien has been stalked since age 14 by the older gay David Kammerer (Michael C. Hall) who sees Lucien as his lover, but in this version of the story Lucien acted out his same sex proclivities with both Ginsberg and Kerouac. Lucien murders Kammerer and drags his body into the Hudson River (recall the opening scene of the film) and it is the advice of both Kerouac and Burroughs that leads to the judgment of the questionable verdict. Ginsberg goes on to create ‘Howl’ and Kerouac moves toward ‘On the Road’ and Carr becomes a journalist. Despite the at times confusing dichotomy between the murder story and the literary awakening the Beats introduced, this is a fascinating depiction of a movement of enormous impact.

John Krokidas captures all the essence of the times in the 1940s New York City and his actors – especially Daniel Radcliff – bring this story to life. There is an uncredited role of Lucien Carr’s mother superbly played by Kyra Sedgwick and any number of other fleeting bit parts that add to the mystique of the period. Recommended on many levels. 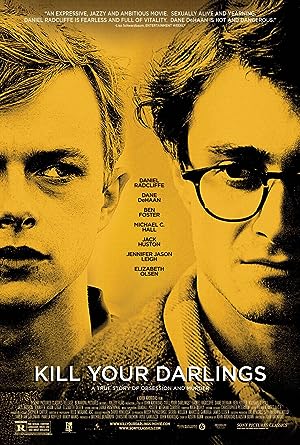