Occupied France; Lebrac leads a play war between two rival kid gangs, but a girl he likes, who’s Jewish, is in danger of being discovered by local Nazi sympathisers. Lebrac and the village must now respond to the reality of what’s happening.

This is a marvelous ode to childhood plenty of innocence , friendship , cooperation , curiosity and comradeship . Director Christophe Barratier shows these important and universal values through children’s minds . It is a notorious picture of great educational content , including an enjoyable and attractive message . It is set in occupied France, when the French Resistance came in all shapes and sizes , there Lebrac (Jean Texier), who is coming of age , leads a play war between two rival kid gangs, but his feelings for Violette (Bachelier) , a Jewish girl in danger of being discovered by the Nazis, encourage Lebrac to face the reality of what’s happening around him . As the children engage in battles where they cut of the buttons, shoe-laces, belts and braces of their captured opponents . The boys are frequently battling with their wooden swords, sticks or building traps in the woods expecting to remove the buttons from the enemies’ clothes. The two leaders of the groups nonetheless develop a grudging admiration of the other and an estranged friendship . Meanwhile , there are developed troublesome relationships between parents (Kad Merad , Gérard Jugnot) and children ; furthermore , a love story between a Master (Guillaume Canet) and a shopkeeper (Laetitia Casta) ; and Lebrac has a crush on the Jewish girl .

French cinema has a great ability in dealing with films about childhood , with interesting and thought-provoking messages that are a clear example of an allegory of notorious values such as friendship , honor , collaboration and anti-war denounce . ” La Guerre Des Boutons ” is a song and an allegory to childhood , where curiosity and innocence are the most characteristic attributes having children . Amusing and fun scenes in which rival gangs of young French kids enjoin in constantly escalating battles that ultimately entails the removal of the buttons from the clothes of captured losers . We do see the world we know each and every one of us, but from his innocent look , with much more easygoing . That’s where all the power comes from this movie, because of their protagonists playing war according to the rules , with a greater sense of loyalty and honor which is contemplated in the real conflict.

“La Guerre des Boutons” is a splendid ode to childhood , a nostalgic trip to the past in which we become children an hour and a half , where everything was discovered , in which the games were serious things . It’s a kid’s movie but its strength lies in its universal character , not a story just for kids , it’s for everyone . This entertaining film displays a colorful as well as evocative cinematography by John Poisson . In addition , a sensitive and rousing musical score by Philippe Rombi . The motion picture was well directed by Christophe Barratier ; its approach is exquisite and original. It is a great antiwar portrait appointed to children as well as adults . 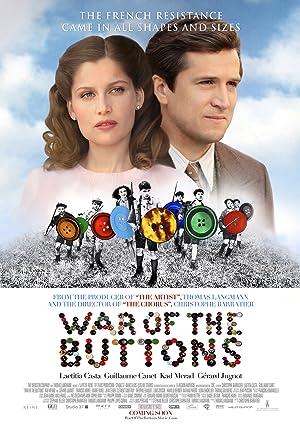