A social movie about current life in the north of France. Freddy and his friends are all unemployed. They pass away time by wandering around on their motorcycles and by directing their aggressive feelings towards Arab immigrants. Freddy is in love with Marie, a cashier at a local supermarket. When she is proposed to by Kader, a young Arab man, Freddy and his friends have an idea: they decide to punish Kader for what they call “such a provocation.” After they have raped another girl, Marie finally commits to Kader, which seals his fate.

Bruno Dumonts “La Vie de Jésus” is one of the best movies I saw that year. It’s a very gripping tale of a group of bored, at first glance no-good youngsters, who end up in a lot of trouble because of their racism. To me, without being a patriot, this isn’t really a French, but a Belgian movie. The setting (French Flanders), but also the themes it deals with, the environment (no foreigner can fully grasp the horror of all those old people sitting on their chairs in the doorstep, waiting for something to happen, staring at the occasional passer-by). But whatever country it is made in, it is a strong story, filmed in a raw way, which very much fits the rawness of the characters in the movie. If you take under notice that all the actors were amateurs, yet they manage to make lots of so-called pros look like the real amateurs, you have to give the director credit for that. 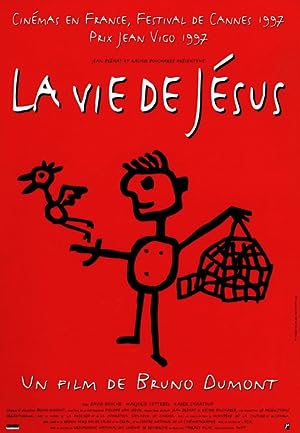 The Life of Jesus (1997)
96 min|Drama, Romance|04 Jun 1997
7.0Rating: 7.0 / 10 from 2,220 users
A social movie about current life in the north of France. Freddy and his friends are all unemployed. They pass away time by wandering around on their motorcycles and by directing their …
Director: Bruno Dumont
Creator: Bruno Dumont (scenario)
Actors: David Douche, Marjorie Cottreel, Kader Chaatouf, Sébastien Delbaere