“Lamb” focuses on the relationship between Brother Michael Lamb (Liam Neeson), a teacher in a Roman Catholic-run institution for troubled boys in Ireland, and 10-year-old Owen Kane (Hugh O’Conor), the school’s most unruly pupil. Dumped into the institution by his abusive mother, Owen is an incorrigible mess who smokes cigarettes, curses, wets his bed, picks fights and has epileptic seizures.

I must profess the only reason I taped this film when it was shown recently on Australian ABC TV was because I saw that Liam Neeson and Ian Bannen were in it.

I therefore began watching it knowing absolutely nothing about it. I came away feeling slightly disappointed, but overall I found it enjoyable.

The story concerns a priest, played with suitable piousy by Neeson, a man whos faith is slowly ebbing away in the face of hardship.

His eye falls to a newcomer to the school at which he works, a young boy called Owen who seems to have quite a chip on his shoulder, and does not like authority of any kind.

The two develop a friendship, and, at a crucial moment, the priest decides to kidnap the boy and travel to London and better climes. He tells Owen that he has talked to his mother and gained permission to have him for a while.

They spend a while in London (living off an advance of his inheritance from his recently departed father), and get quite close.

But Owen suffers from epilepsy, a condition which requires constant medication. And when the money and drugs start running out…

Lamb is quite a routine picture for much of its length, lacking any real emotional depth until the last 20 minutes. Its length is perhaps a bit long, with its paper thin plot stretched out to accommodate this.

Apart from the last 20-30 minutes where the desperation starts to set in and they run out of money, resorting to more seedier accommodation, it really lacks the hook to keep a viewer interested. 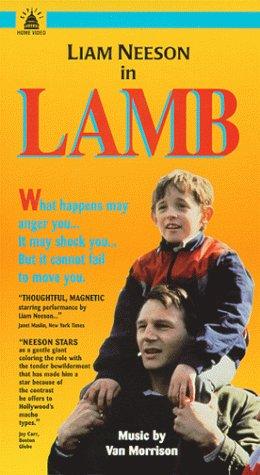