Over the course of a summer vacation, two brothers struggle with the harsh reality that the younger brother will be sent to a school for children with special needs when a new term begins.

Xavier and Jacques are two brothers grew up in the shadow of a difficult father and a grandmother who seems carved in the pain of the crudest fables.
Their childhood have shaped the absence of the mother, long dead, who knows why, and have forged with hard scales of suspicious looks, who does not expect too much from a world that has already taken so much.
Living of their bond, it being, who aspires to the immutability of the myth, the firmness of the trees that rise to the sky, to the strength of the rock. And together they face the world, in the hope that this-sufficient to each other is not crumbled by adults.
Jacques, the little one, just seven years and a shelter under an old tree where they could be alone with the memory of her mother, a child is apparently more difficult. Immersed in nature to the neck of each bird he is able to recognize the species and play with butterflies and insects as if they were little friends want to name, and a space in the world. Intelligent, yes, but difficult to place in provincial schools where the children look up, in the evening, the football games on TV. Him a small change in his life would also be willing to accept it. He does not mind going elsewhere, in special schools, with other children more like him.
Xavier, meanwhile, has the clotted violence on his hands in a perpetual gesture of defiance. Can not bear to see his father hang around the house with the memory, in the eye, the wars fought in Iraq and Afghanistan. It can not stand that friends ask of a mother who did not even appear in a dream. And especially does not like the idea down that take away the little brother destined to another school, to leave him alone with peers who do not understand and do not understand it.
Thus, newly Hansel and Gretel the two small run away from home without even the footprint of the crumb of bread to mark the road and live a few days of their last summer together wandering stray, fishing fish in the river, climbing on trains without a ticket and without half.
Gilles Martinerie, director of this Le diable dans le peau, chooses for his work the way a dried drama that never tries, even for a moment, the easy narrative empathy for boys. The story, if anything, it advances to the enviable photographic beauty paintings, while a string quartet, which has forgotten the street Debussy and if anything thought to dissonances, comments from this sad tale predestined to the tragedy.
French cinema is also confirmed in this film its gentle inclination to the vision of childhood. If The War of the Buttons, presented out of competition at the International Film Festival of Rome, tells us, however, the sunniest side of childhood that knows how to be ray of sunshine even in the most blacks, Le diable dans le peau is instead , the singing of the other side of the moon, the torment and anguish of being children in a deaf and blind world.
The director reveals immediately a superb director of actors, with the children to perfect each shot. But is primarily a singer at times rabid tales where the fairies are just distant extras.
(google translated) 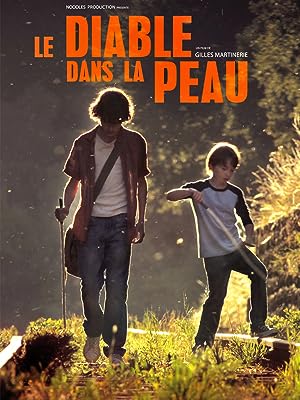 The Devil in the Skin (2011)
82 min|Drama|27 Mar 2013
7.2Rating: 7.2 / 10 from 33 users
Over the course of a summer vacation, two brothers struggle with the harsh reality that the younger brother will be sent to a school for children with special needs when a new term begins.
Director: Gilles Martinerie
Creator: Gilles Martinerie, Nicolas Peufaillit
Actors: Quentin Grosset, Paul François, Francis Renaud, Joséphine Derenne