A discontented Parisian teenager in search of a father with (Mathieu Amalric) and (Fabrizio Rongione) as his, respectively, callous and gentle alternative paternal options, and (Natacha Régnier) as his single mother.

Biblical themes crop up in all kinds of films. Whether it’s Henry Cavill acting all crucified in Man of Steel or notions around what it means to be human in Blade Runner, Christian metaphors, parables, and allegories pop-up in the most unlikely of places. On Occasion, films like the impressive Brand New Testament are more overt in their dealings with God. In Eugène Green’s The Son of Joseph, his chapters may have Biblical references but it is far from holy.
Now in his teen, Vincent (Victor Ezenfis) has always resented the fact that his mother (Natacha Régnier) refuses to reveal the identity of his father. When he finally discovers it’s Oscar Pormenor (Mathieu Amalric), a distinguished publisher, Vincent is desperate to get to know him. As he secretively observes his father, it quickly becomes apparent that he’s not the kind of dad anyone would want. Vincent vows revenge. However, he strikes up an unlikely friendship with Oscar’s disreputable brother (Fabrizio Rongione), which leads him down a different path.

The Son of Joseph is easily the most accessible of Eugène Green’s films. The interactions between Vincent and Joseph (Oscar’s bother) form the touchstone for a melting pot of ideas and emotions. Whilst it’s largely left to Amalric to provide the humour. Green is a great observer of people, and like his previous work, The Son of Joseph isn’t a conventional drama. Merging highbrow and lowbrow, It’s a parable about family and friendship; set in a theoretical world. 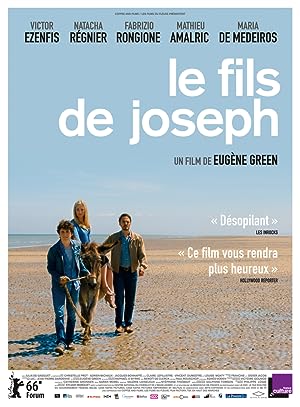