Marc and Nathalie are brother and sister living separately since their parents’ separation. Marc decides to visit Nathalie but in order to finance his trip he robs a shop bringing him to the attention of the police.

In my comment on “the hairdresser’s wife” (1990) by Patrice Leconte, I wrote that this gorgeous movie was awarded by the “Louis-Delluc” price with “le petit criminel” (1990). It was only right. Although I consider Jacques Doillon’s movie as inferior as “the hairdresser’s wife”, it remains interesting and especially devoid of stereotypes linked to adolescence. A lot of directors would have focused on Marc’s living conditions, it means on the hero’s sociological environment. In Doillon’s movie, it’s not the case. In the most important part of the movie, he created a condensed and intimate atmosphere with only three characters.

Dialogs constitute the key of the success of the movie. It probably contains some of the best dialogs ever written in the French cinema. Thanks to them, Jacques Doillon draws a convincing description of each character but he especially emphasizes on their feelings and their relations. The movie is essentially built on these last two points. Never boring, rather pathetic, they create a real emotion on the spectator and sometimes they don’t lack of humor.

You also feel that Doillon manages very well his actors who are perfectly at ease in their respective roles: Gérard Thomassin in an unhappy teenager who’s clumsily searching someone to love and understand him. Then, there’s Clotilde Courau in a protective sister and above all Richard Anconina, a cop torn between two feelings: his sense of duty and the complicity he shows towards his two partners. I think it’s his best role and it’s clear that he’s between the hands of a conscientious and rigorous director.

Perhaps, there’s one sole weakness: the music that often appears at awkward moments.

But apart from this, “le petit criminel” is a warm, fair and mastered movie. 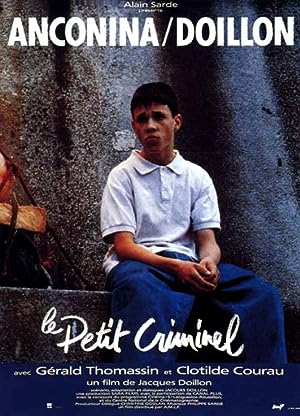 The Little Gangster (1990)
100 min|Drama|19 Dec 1990
7.0Rating: 7.0 / 10 from 319 users
Marc and Nathalie are brother and sister living separately since their parents' separation. Marc decides to visit Nathalie but in order to finance his trip he robs a shop bringing him to the attention of the police.
Director: Jacques Doillon
Creator: Jacques Doillon
Actors: Richard Anconina, Gérald Thomassin, Clotilde Courau, Jocelyne Perhirin

Be the first to review “Le petit criminel 1990” Cancel reply