Birch, a young man living in the Catskill Mountains, reunites with his childhood friend from the city, Andrew.

I recently watched ‘Leather’ with about two dozen gay nudists, gathered around a good-sized, living room monitor. After an hour or two of cordial meeting-and-greeting over beer, wine and assorted munchies, the group sat and considered their viewing options from the half-dozen or so DVDs available. Dispensing with a few super- heroes and hearing a recommendation from one naked soul and an ‘I heard it was good, too’ from another, the butt-naked crowd settled in with a beer in one hand and a ‘this had better be good’ in the other.

The movie quickly establishes a light, easy-going, and very natural feel. The characters enter and unveil their relationship within the context of a departed father figure and two strong, handsome young men with close or familial ties to the dead man. The scenes are all set in a large cabin or its surrounding forest. Simple enough, except the director deftly uses those trees and trails and feral sounds to create another major player in the piece. The forest is never just a set. It becomes an observer to the unfolding drama, a silent Greek chorus. Often, when a key scene plays out, the director doesn’t ‘cut’. The camera lingers a few more seconds on something or even on nothing; but the effect is to let the emotions marinate a moment and to leave the viewer with a sense that he, too, is surrounded by woods, by nature, watching as the growing tensions play out. The result inevitably engages.

The story is basically man re-meets man, upon the death of a shared paternal figure. Their backgrounds are clearly established in broad strokes and in small, telling, visual hints that draw the viewer into the conflict that shapes the work’s dramatic arc. Sure- handedly, the script sets the two men into a bound, but bitter, rivalry for the departed’s love, attention – and his estate. The two leads in the piece are both beautiful. Early thirty- something, there is the urban ginger – smart, confident, worldly and accomplished. His manly charms are on full and tasty display, as are those of his bearded, bearish, dark-haired counterpart. The camera’s foreplay on their hunky bodies is tantalizingly slow, but nothing is left to the imagination as the drama moves towards its climax. If you’re hunting for a sexy drama – with gorgeous, naked, lovemaking men – you’ll definitely find the right trail in this forest.

What makes the movie stand out is its deft, light directorial touches. Anyone can shoot two hot guys circling and then entwining each other. But it takes a surer hand to make you care about those two men. It takes an accomplished director to make you feel the forest and feel the tension and feel the warmth that is generated from the script. The director allows both the confines of the cabin and the wilderness of the forest to edge the story along as we get to know the two leads. Their first non-confrontational scene uses two clever cinematic tricks – first, it introduces the physical nakedness of the clashing personalities as they literally and metaphorically strip down and open up in the communal waters of a forest pond. Second, it entices the viewer by placing the camera at a slight distance from this action. With unfocused reeds and grasses between you and the naked players, you voyeuristically observe their initial conflict and are slowly drawn into their growing intimacy as the two leads work through their differences. The camera becomes a participant in the action, sneaking up and cautiously approaching, incrementally drawing the viewer into the rising heat of the exchange.

Similarly light, natural and clever touches throughout the film pull you further into the story. The most dramatic scenes are allowed to play out like a theater piece. There are amazingly few cuts in scenes with two or even three actors who interact in a highly emotional manner without the interference of constant cutting and reversed reactions shots. Like the best Woody Allen pieces, the camera becomes a quiet observer, never encroaching on or undermining the power of the words being spoken. The effect, again, creates a natural fluency which strengthens the drama by pulling you deeper into the action. Also notable within the director’s able bag of tricks is his lighting. I can attest, as a photographer, that cabins and forests and fires provide very daunting challenges when you’re trying to convey a natural intimacy. Leather’s night scenes are often lit with no more than a naked bulb or a campfire; yet, the director has turned these challenges into advantages by using that restrictive lighting to support the delicacy of the dialogue and to power the dramatic drive of the storyline. It’s a very nuanced and effective approach.

It’s not the greatest movie ever shot. And the underwritten, overacted role of the soon-to-be-ex-lover of one of the two leads lurches from one gay cliché to the next. But this is an otherwise well acted, well constructed, and thoughtfully directed and photographed flick that delivers a beautiful and often erotic tale told in a convincing and very pleasing manner. If the audience with whom I viewed the movie is any measure, only three butts rose from their seats – one to get another beer and two because their beers had run their course. The consensus among the entire group :: ‘Hey that was really good !!’ – ‘cuz it was. 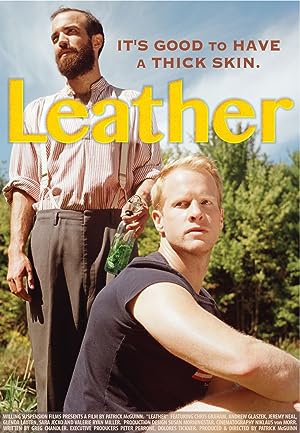 Be the first to review “Leather 2013” Cancel reply