Young Leo Lauzon is torn between two worlds – the squalid Montreal tenement that he inhabits with his severely dysfunctional (and largely insane) family, and the imaginative world that he constructs for himself through his writings, where he’s Leolo Lozone, son of a Sicilian peasant (conceived in a bizarre act involving a tomato). And his experiences of growing up (especially his sexual development) affect his response to both these worlds…

A boy is coming of age in a totally dysfunctional family. The parents are obsessed with bodily functions – the father checks the boy’s output after each visit to the toilet; all five children are forced to take laxatives. If you see dark humor in this, then you may like this movie. I’m afraid the humor flew over my head.

We see rats in the sink, rats in the bathtub. In one scene, that I assume is to have some special meaning, we see at some length a filthy turkey in the bathtub. What’s the meaning of that? And what an inspiring thing it is to see a young boy having sex with a cat.

I felt like taking a shower after watching this movie.

The boy, Léolo, finds his family so difficult to deal with that he escapes into dreams, fantasy, and writing. Maybe understandably, most everyone in this family winds up going nuts or heading toward death.

The music is a grab bag. There is a mixture of things like Tom Waits’ “Cold Cold Ground,” Tallis’ “Spem in Allum,” the Stones’ “You can’t always get what you want,” and chanting.

Much of the movie is told in a voice-over and sections of the novel “L’avalée des avallés” by the Canadian Réjean DuCharme are read – this is a book that Léolo is reading and it is the only book in his house. A recurring quote is, “Because I dream, I’m not.” I think the idea behind that is that we dream to escape reality, but your guess is as good as mine.

I have to give this movie credit for coming out of nowhere to give us something like we have never seen before, but that doesn’t mean that we will like it. Sometimes there is a fine balance between art and pretension and, for me, this movie weighs in on the pretension side. 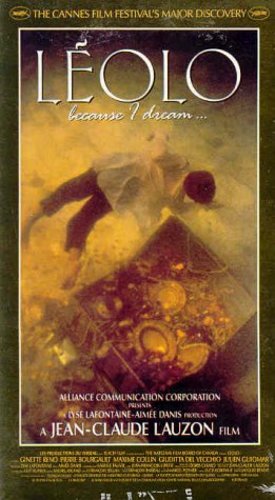