One of the mavericks of the French cinema ,Gerard Blain became famous with three great works ,two of which (“Le Beau Serge” “Les Cousins” )belonged to the Nouvelle Vague whereas the third one was one of the masterpieces of the old one (“Voici Le Temps Des Assassins”). The clues to his future as a director were not Claude Chabrol or Julien Duvivier though.His most notable influence is arguably Robert Bresson.The amateurish acting of the actors who deliver their lines in a neutral voice ,a sense of ellipsis ,all that reminds you of Bresson.

In his absorbing memoirs “J’Ai Oublié DE Vous Dire” ,Jean-Claude Brialy ,who was Blain’s co-star in “Le Beau Serge” and “Les Cousins” ,wrote that he was sexually assaulted as an adolescent and that his hatred for homosexuals was strong.In his film,it does not show.Neither does it in “Un Infant Dans La Foule”.

Blain was an accursed actor/director who never got the praise he deserved even though “Les Amis “was awarded a prize in a festival.

Like in “Un Infant Dans La Foule” ,Blain put a lot of himself in “Les Amis”;like his hero,he left school when he was 13,his father left his family when he was Young ,and he used to live with his mom and sister;and he became an actor ,even though his fame was short-lived .

In “Un Infant Dans La Foule” ,the youngster would sleep with men to provide his family with food -it was the Occupation days-;in “Les Amis” ,Paul is a flayed alive teenager desperately in search of a dad :his relationship with Philippe is much more complex than a sexual attraction :he uses the word “godfather” when he introduces his friend to friends and the word rings true: no one taught Paul to live -the scenes with the mother and the sister are revealing -,no one talked him about love (there’s a deeply moving conversation on the beach in which we learn that Philippe leads an unfulfilled life but that there are things such as tenderness,memories ,which survive in his Relationship with his wife ).When Paul meets people his age (and particularly the attractive blonde Marie-Laure ) the older man does not get jealous,does not ask any question .

Even when they play the parts of Theseus and Hippolytus in Racine’s “Phèdre” ,they use a neutral delivery to serve the playwright ;like his master,Bresson,Blain refuses any dramatization: Philippe’s car crash is not shown;it’s not because she ‘s discovered Paul is bisexual that Marie-Laure walks out on him,but because she’s a selfish spoilt young bourgeois (Blain depicts in lavish detail the girl’s desirable mansion and Paul’s seedy flat)And the good friend (Jean-Claude Dauphin ,an actor who became a bit famous on TV films later)is not a traitor :as Paul discloses everything to him,that Philippe is his lover,that he is no rich kid,he might have used it as a weapon to get the blonde girl:even though he has sex with her ,he remains true to his pal and their friendship,as they leave the cemetery ,is the reason why distraught Paul will carry on.

This is a delicate movie,with a great sense of decency ;the cinematography is luminous and splendid ;Deauville ,par excellence the posh seaside resort, had never been filmed that way:in spite of the luxury hotel,of the tennis courts ,of the rings where the Young jet set learns to ride their horses,Blain makes us feel a threat ,a sword of Damoclès hanging over Paul’s head (it may be the bellboy who briefly turns round when Paul returns to the room he shares with his friend;it may be Marie-Laure’s parents who ask him about his high school;it may be his sister who wonders how he makes money).

François De Roubaix’s score is different from what the great musician generally writes :his music sounds casual ,”soap opera” ,and it serves the movie,for it enhances Paul’s imaginary life.

People looking for homo-erotic stuff will be disappointed for sure;but cinema buffs interested in French cinema should see “Les Amis” . Let it be an introduction to other Blain’s films : ” Un Infant Dans la Foule’ “Pierre Et Djemila” and his curious MTV “La Fortune De Gaspard “,from La Comtesse De Ségur which depicts ,in its way ,another homosexual -athough platonic- relationship between an old manufacturer and a very ambitious young dude. 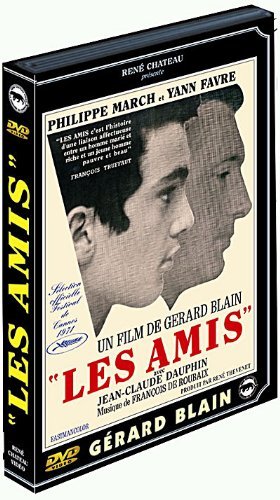