But while Mingozzi must have seen Tendres Cousines, his film is not a carbon-copy by any means. Hamilton’s film closes with a romantic happy ending that just does not ring true and Mingozzi avoids this fault. Our Roger may be hormonally oversupplied, but the find-a-girl-to-settle-down hormone is nowhere to be seen. Keeping the plot bubbling along was also not one of Hamilton’s strengths – he focuses on scenes and lighting, while ‘Exploits…’ is overall a more rounded picture.

Perhaps the most striking difference between both films are the objects of sexual interest. In Hamilton’s case the word “nymphettes” inevitably springs to mind, while Mingozzi’s objects of desire are less obscure – quite simply “women”, of different ages and shapes. In particular, Hamilton lets his older women (meaning: older than 22!) hint at expressing their sexual desires, but cruelly these desires always remain unsatisfied – Mingozzi is much more merciful in that respect. 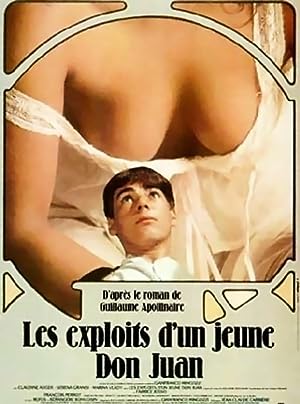 What Every Frenchwoman Wants (1986)
95 min|Comedy|06 Jan 1987
5.8Rating: 5.8 / 10 from 845 users
A teenager returns home to relax during his summer vacation; however, in a mansion full of women, he will have no other choice but to expand his education in a more titillating way.
Director: Gianfranco Mingozzi
Creator: Guillaume Apollinaire (novel), Jean-Claude Carrière, Peter Fleischmann, Gianfranco Mingozzi
Actors: Fabrice Josso, Claudine Auger, Bérangère Bonvoisin, Serena Grandi