Being a student in a school where the headmaster is your father and the head supervisor your mother is no bed of roses. That’s what Daniel Massu tells himself every day of his life. The others believe he is his father’s pet whereas the latter wants his son to sleep in the dormitory with the others, which he hates! And although Daniel claims he has swept the sexy Mercédès off her feet he is no ladies’ man! To say nothing of his bad spelling, which regularly earns him appallingly low grades. But Damien, who has drive, does not let all those problems get him down.

“Les fautes d’orthographes” tells two stories, which is the main drawback of this interesting movie: at the end, we have a feeling of unachievement, because two (intricate) plots are started, and none are really finished.

Despised this problem, I strongly recommend this movie, for both plots. The first one is the portray of a young teenager put in a difficult position (his father is the severe head of the boarding school where he is pupil) at a difficult time (being 14-year-old, his body is still the one of a child). The conflict with the father, the discovery of sexuality, the embarrassing presence of the mother… contribute to a strong tension, stressed by the natural sadism of teenagers in a boarding school.

The second plot is about the discovery of radical political action of the group of pupils to react against the severe head of the school. These young people read anarchist authors and try to apply their theory of revolution (“hop hop hop rebellion!”) to the pre-68 school administration. The movie turns to a discovery of the right to rebel against authority.

Let’s finish this comment by mentioning the very good level of each actor, both adults and teenagers. 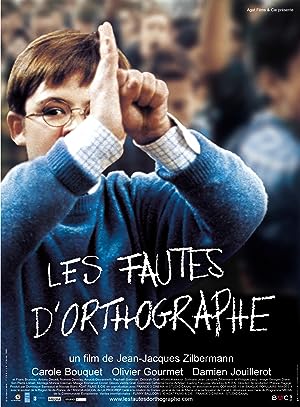 Bad Spelling (2004)
90 min|Drama|03 Nov 2004
6.3Rating: 6.3 / 10 from 307 users
Being a student in a school where the headmaster is your father and the head supervisor your mother is no bed of roses. That's what Daniel Massu tells himself every day of his life. The …
Director: Jean-Jacques Zilbermann
Creator: Philippe Lasry, Jean-Jacques Zilbermann
Actors: Damien Jouillerot, Carole Bouquet, Olivier Gourmet, Raphaël Goldman