Les doesn’t have a driving license yet, but to impress his gorgeous date Mercedes he borrows his grandpa’s Cadillac for a night out… and has to witness the poor car going through more and more intense maltreatments.

The sixteen year-old Les Anderson (Corey Haim) has a crush on his schoolmate Mercedes Lane (Heather Graham), but he is shy and she has a boyfriend, Paolo (M.A. Nickles), who has a fancy car. Les and his twin sister Natalie Anderson (Nina Siemaszko) are preparing to the driving test and while Natalie studies the questions, he does not pay attention to them. Les fails the test but is not brave enough to tell neither to his father Mr. Anderson (Richard Masur) nor to his pregnant mother Mrs. Anderson (Carol Kane) and his best friends Dean (Corey Feldman) and the clumsy Charles (Michael Manasseri). When Mercedes has an argument with Paolo, she invites Les to date her to make Paolo jealous. Meanwhile Les’ parents discover that he has flunked his driver’s test and they ground him. However, when Mercedes calls him asking if they are not going to date, Les sneaks away from his house and drives his grandfather’s Cadillac that is parked in the garage to date Mercedes in the beginning of a nightmarish night of adventures.

“License to Drive” is a comedy from the 80’s still very funny after almost thirty years. This is one of the best roles of Corey Haim in the top of his career immediately after the cult “Lost Boys” and “Lucas” and the debut of Heather Graham. The plot would be considered “politically incorrect” in the present days but fortunately it was not a problem in 1988. My vote is seven. 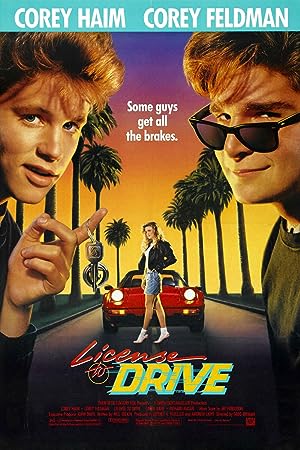 Be the first to review “License to Drive 1988” Cancel reply