Fifteen year olds Ferris Whitney and Angel Bright meet when they attend the same summer camp and are assigned the bunks next to each other in the same cabin. It’s hate at first sight as they are seemingly polar opposites: romantic and literate Ferris comes from a wealthy and thus privileged background, while streetwise and chain-smoking Angel is from the proverbial wrong side of the tracks. But they share one similarity: they are both virgins, the only ones of their age in their cabin. Due to pressure from their cabin mates, most specifically the aggressive Cinder Carlson, the two enter into a bet on who will lose their virginity first and by the end of the summer. Ferris, who initially seems more interested in the pursuit of the opposite sex, quickly sets her sights on Gary Callahan, the much older coach at the camp. But Angel finds her own target, namely Randy Adams, an equally streetwise boy attending the camp across the lake. The process becomes a bonding exercise for the two girls, who take divergent paths to their end goal and in dealing with the aftermath of the alleged big events.

Little Darlings is a classic teen movie but the appeal is that it can actually be enjoyed by all ages. I have seen this one and one half times. I FIRST saw it when I was a kid but I actually think it can be enjoyed as much or more as an adult. Little darlings is both a cute movie and a fun one-although it’s a light movie, the characters go through and tackle, issues all young girls deal with in a fun non preachy manner and is pretty accurate in many places too. The reason it is so much fun to watch as an adult is for nostalgia purposes. Set at summercamp, it sort of takes you back to your youth. The movie is dated as anything and when I recently caught it again I almost had to laugh at the dated aspect but the fact remains it can still be enjoyed today.Teens will identify with it, adults will reminded of times gone by. 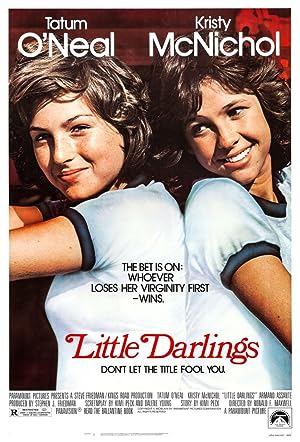