Suddenly, into the poor but happy lower-class Manhattan home of the widow Errol and her son Cedric, aged about 9, comes an agent from Cedric’s mysterious grandfather, the Earl of Dorincourt, asking them to move to England so that Cedric can learn aristocratic ways and inherit the vast estate. Cedric’s mother consents with misgivings, especially for having to live in a house nearby rather than in the castle with her son. The Earl proves to be a penurious misanthrope, hated by almost everyone who knows him. But from the beginning, Cedric sees only good in him, can’t imagine that he would ever treat his tenants and villagers poorly, and wins their hearts with kindnesses, giving all credit to his grandfather’s wishes. Soon the dour old man finds that he loves this cheerful little boy so dearly that he wants to live up to this new image of himself. The sudden appearance of a vulgar, ambitious American claiming that her son is the true heir to the title is a more grievous blow to him than anyone would have thought possible.

This film was released in 1980 (as stated), three years after my younger daughter was born. I taped it on TV, and she watched it avidly for many years. It became a milestone in our family life.

Within a year of first seeing it, my daughter knew every line of the script, and we would watch her watching the movie, her lips moving, speaking all the parts…(she was of course, going to marry Ricky Schroder). She still has the tape, and even at 28 years of age, still watches it from time to time. But it is sadly worn, and like another reviewer, I too long for it to be re-released on DVD. It is a beautifully made story performed equally beautifully by a superb cast.

It is an exiting story for all ages, with a feel good ending reminiscent of a kinder and more gentle age. May it last forever, and if anyone knows where it may be purchased, either new on tape, or even if it has indeed been released on DVD…please, PLEASE let me know…Enjoy! Brian Arpel 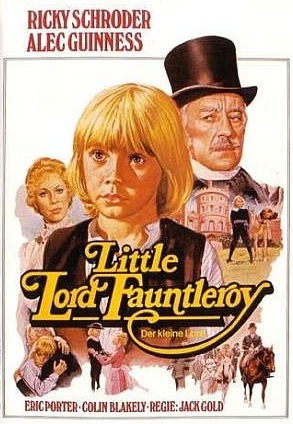 Little Lord Fauntleroy (1980)
103 min|Drama, Family, Romance|25 Nov 1980
7.5Rating: 7.5 / 10 from 3,502 users
An American boy turns out to be the long-lost heir of a British fortune. He is sent to live with the cold and unsentimental Lord, who oversees the trust.
Director: Jack Gold
Creator: Blanche Hanalis (screenplay), Frances Hodgson Burnett (based on the novel by)
Actors: Ricky Schroder, Alec Guinness, Eric Porter, Colin Blakely