Roy Parmenter is a veteran FBI agent who has spent the last 20 years trying to find the Russian agent who killed his partner whom he calls Scuba. When a couple of deep cover Russian agents are killed Parmenter thinks Scuba is the one doing it. The Russians who have received word from Scuba that if they want him to stop, they have to pay him. So they send a veteran Russian agent, Karpov to stop him. Parmenter was tasked with performing background checks on people applying for certain things requiring security clearance and when he comes across Jeffrey Grant who’s applying to the Air Force Academy, he discovers that his parents’ info is false. He also learns of Karpov coming into the country and suspects that he is here to stop Scuba and that Karpov went to the city where Jeffrey and his family live, so he decides to keep an eye on Jeffrey and his family.

I would bet that of all the films young River Phoenix did in his short and sweet life, Little Nikita is probably the one where he played the most normal of kids. But it’s that very normality that is the basis for the shock unfolding before him.

A rogue agent played by Richard Lynch who has specialized in playing really evil and loathsome types on the big and small screens is going around killing various sleeper agents that the Russians have planted over the years in America. Lynch is blackmailing the Soviets for big bucks to stop bumping off the deep cover spies. One of their top guys, Richard Bradford, is going to America to deal with the problem. As this is the time of Glasnost with Reagan and Gorbachev in some serious and far reaching negotiations, we don’t want this to get public and blow up the summit.

At the same time while Sidney Poitier as an FBI agent is running routine background checks for armed service academy admissions, something really doesn’t compute in young River Phoenix’s background. It turns out that his parents are deep cover agents who’ve never been activated to do anything. And by an incredible coincidence I just really couldn’t buy, Lynch is a guy who killed Poitier’s partner many years ago and he wants him too.

You’d think that with this kind of problem a little below summit Glasnost would have been in order for the KGB and FBI. But no, they’re both working at cross purposes for the same goal.

What Little Nikita does have going for it to give it as many stars as it does have is River Phoenix’s angst ridden performance of an All American kid whose whole world comes crashing around about him. River’s screen characters were usually quirky, but he could play a normal kid and well.

Phoenix’s performance and the nice location shooting in and around the San Diego area are the only reason to watch this well meaning, but ultimately rather silly film. 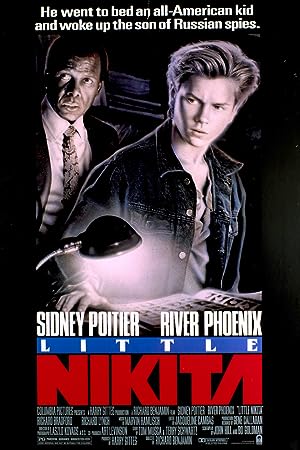 Be the first to review “Little Nikita 1988” Cancel reply