A hearing-impaired boy, Min-so is gay, and he likes his classmate, Ji-seok. One day, Min-so impulsively has sex with a young man who works in a public bath, an experience that lends him new confidence, but at a heavy price.

One day, when he and his brother are set to go to the public bathhouse, and is ditched on the way for his brother’s girlfriend, Min-soo meets the bathhouse’s scrubber, who is more than willing to provide some tender love and care.

LOVE, 100°C probably refers to the intense sexual nature of Min-soo’s encounter with the bathhouse scrubber, though simulated, is a step further from the happy and cute love stories people are used to from Kwang-soo Jho Kim shorts like Boy Meets Boy or Just Friends?. In here, he shows the perfectly cute of delicate demeanor Min-soo being picked on by his classmates, not because he is gay but because of his hearing problem which they confuse with an impediment with his brain. It’s probably not hard to imagine that they would also pick on him if they were to find out about his sexual orientation.

That feeling is even more foreshadowed by the ending, in which Min-soo’s scrubber lover gets found out at the bathhouse and gets beat up, which Min-soo witnesses but is unable to do anything, either by fear of getting beat up himself… or found out.

Overall, LOVE, 100°C is good even if a little jumbled between the contrast of Min-soo’s crush, his sexual desire, his relationship with his younger sibling, and his issues with standing up against society. The ending scene is quite devastating set to the Irish-stapled song Danny Boy. I do not get it either. 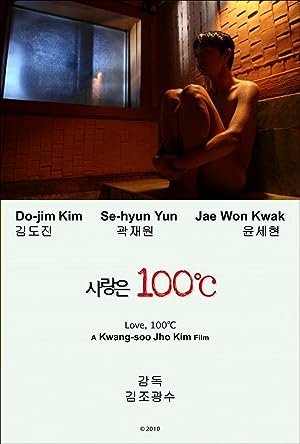 LOVE, 100°C (2010)
22 min|Short, Drama, Romance|N/A
6.5Rating: 6.5 / 10 from 52 users
A hearing-impaired boy, Min-so is gay, and he likes his classmate, Ji-seok. One day, Min-so impulsively has sex with a young man who works in a public bath, an experience that lends him new confidence, but at a heavy price.
Director: Jho Kwang-soo Kim
Creator: Jho Kwang-soo Kim
Actors: Do-jin Kim, Jae-won Kwak, Se-Hyun Yun