Love Actually… Sucks! was inspired by real-life events, and opens with a dramatic wedding feast. It tells a variety of stories about love that has gone wrong: a brother and sister in an illicit relationship, a married painter who falls in love with his young male life model, a dance school teacher who is besotted with his senior student, and a lesbian couple, one of whom has role-play paranoia, and is caught in a complex love triangle. The film celebrates the belief that life is love.

I was interested in getting this film because, on paper, it sounds like it has the ingredients of a thought-provoking, delicate film. It focuses on a number of morally dubious love affairs – murderous, incestuous, lecherous, exploitative and unrequited in turn. There’s an exposed sibling affair, a love triangle resulting in vengeful murder, a ‘The Graduate’ style older-woman seduction, a shy artist who lusts after and stalks his male model, a wedding sabotaged by a jealous ex-lover and the obligatory lesbian schoolgirl couple. Each story ends in tragedy, in a courtroom or with some ironic twist. To top it all off there are lots of controversial sex scenes, which, I thought, could only be a good thing.

It sounded like it must either be a daring dissection of forbidden love in China or thinly veiled pornography, neither of which would have been a loss in my mind. Sadly, however, it’s neither of those things.

First, the sex scenes are jarringly explicit, to the extent that they cross over from movie sex and often become pornography. This is not a good thing. Movie sex scenes are wonderful and ever-popular because they’re conservative, tastefully filmed, well-acted and character- driven, which actually makes them far more titillating than anything from an adult store. The sex scenes in ‘Love Actually…Sucks!’, however, are oddly shot, emotionless, drawn-out, too well-lit, too sudden, leave too little to the imagination and – most importantly – don’t draw from or develop the characters. They’re explicit but emotionally vacant: sex for sex’s sake.

As they don’t arouse the viewer or develop the characters or story, they’re without purpose: sex in a film has to do at least one of these (preferably both). I was reminded of Tommy Wisseau’s approach to love scenes in The Room. Like Wisseau, the director seemed eager to get nudity and sex scenes into the film at every available opportunity but seemed unable to make them serve the film’s purpose, so instead they just float in and out of it, making you feel awkward.

Purpose is the second problem with the film. It’s obvious what it is trying to do – point out the irony, the injustice and the sting of love gone wrong – but it’s so thin on dialogue and hamstrung by its low budget that that message doesn’t have a chance to unfold. The sparse dialogue (which switches disorientatingly into English at random moments for no situational reason) could have been compensated for by good screenplay and acting, but most of the actors are mediocre and token, and the screenplay is downright bizarre. Odd little scenes with no connection to the plot are interspersed between important ones; the mood changes gear suddenly and painfully with no pacing. Professional editing would have solved a lot of the film’s problems.

It wouldn’t fix the other inevitable side-effects of a low budget, though. The translation is hit-and-miss, with on-screen text messages and signs not being translated at all despite being central to the plot and subtitles containing typos, and there is one memorable special effects failure that breaks the immersion horribly. The picture quality is on par with 80s TV dramas like Taggart and there’s a reliance on stationary cameras, with virtually no moving shots or close-ups.

There are still occasional touches of quality in the writing and direction that survive the budget and the translation, and I did laugh at a couple of moments and was genuinely affected by a couple more; and if you really want to see some Asian sex scenes, you could do worse (although you’ll have to fast-forward through a lot of cityscapes, dining rooms and arguments). But there just isn’t enough here to recommend this film – especially given the limited availability and steep prices. I got it out of curiosity and I won’t watch it a second time. 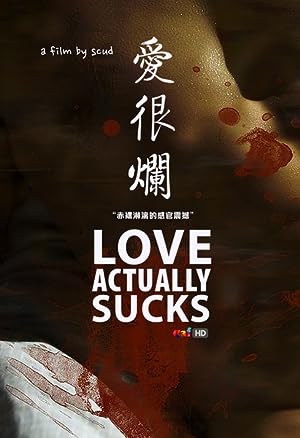 Love Actually… Sucks! (2011)
83 min|Drama|03 Mar 2012
4.3Rating: 4.3 / 10 from 304 users
Love Actually… Sucks! was inspired by real-life events, and opens with a dramatic wedding feast. It tells a variety of stories about love that has gone wrong: a brother and sister in an …
Director: Scud
Creator: Scud
Actors: Osman Hung, Linda So, Haze Leung, John Tai