Julie’s boyfriend Ismaël lives with her; rather than worry about the time he spends with his colleague Alice, Julie invites Alice to join them. The three walk the streets of Paris, party, read, and sleep together. Sometimes it’s lighthearted, sometimes there are jealousies. Then death strikes. In various ways, those left come to terms with the departure and absence of a loved one: showing concern, eating together, attempting new relationships, trying to “be there” for the other. Then, the spirit returns and new commitments are possible. The romantic elements of musical comedy play in contrast to the ambivalence of the lyrics and the story.

A perfect blend of playfulness, joy, sexuality and complete and utter tragedy. All of this is weaved in through the story and, more importantly, the songs themselves. The actors expertly portray every moment of it all, pouring their hearts into the songs whether it’s a bouncy battle between two lovers with another lover in between or a lonely sister wishing for just one more hour of hope. I don’t want to spoil a really big moment that provides all of that tragedy, but something happens relatively early on that floored me. Louis Garrel is an excellent lead and portal into all of these different people, and the supporting cast rounds everything off without missing a beat. The beautiful Ludivine Sagnier, the heartfelt Chiara Mastroianni and one of the most gorgeous women I’ve ever seen, Clotilde Hesme, are all brilliant. It swept me off my feet practically right off the bat and kept me floating throughout the whole thing. A fantastic movie, one of my favorites of ’08 and of all time, for that matter. 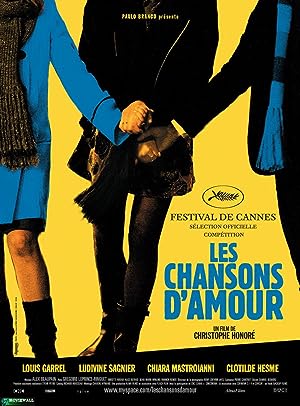