Ludovic is a transgender girl who is coming out. She talks of marrying her neighbor’s son and can not understand why everyone is so surprised about it. Her family and neighbors struggle with her actions.

Wow! I just finished watching this movie today, a few hours ago and was really really surprised by it. Though somewhat weird at times, the powerful performances, thoughtful subject matter, and clever writing just amazed me. Prior to today, I had never heard of the film, which isn’t really a big surprise I guess, foreign films in general don’t do particularly well in North America on a whole. Yes its sad, but also true.

“My Life In Pink” definately ranks HIGH on the list of spectacular international films for me. I only wish I heard about it sooner but like every other thick headed westerner I was brainwashed into paying to see sub-par movies like “Men In Black”, “Lost World: Jurassic Park”, “Con Air”, and “Face Off” in 1997 instead of this. Those movies weren’t horrendous but they didn’t have nearly as much depth and meaning as “My Life In Pink”.

If you can find the video or DVD or even VCD then pick it up and watch it. Many will not like it at all because they may feel its weird or too taboo for them. But for those of you who are more open minded and are in search of a great piece of film making then this is for you. I felt nothing but sorrow and compassion for young Ludovic all throughout the film. His pain and sorrows, his sadness and loneliness, it brought some tears to my eyes seeing how horrendous he was treated. Everybody looked upon him like a monster. That him wanting to be a girl was outrageous and wrong. Yet again, an accurate interpretation of society. Nowadays your not allowed to be anything that society deems unacceptable. Frankly it sickens me. Whether your gay, straight, bisexual, lesbian, or transgender its your decision and nobody has any right to tell you other wise.

“My Life In Pink” accurately portrays the struggles that hundreds of youth face today. Youth that are struggling to discover their identities, having to deal with family and friends that tease and taunt them for being “different”.

I really don’t want to say much about the movie because you should experience it without knowing much to get the whole impact of its message. See this movie. Its a prime example of AMAZING French cinema. 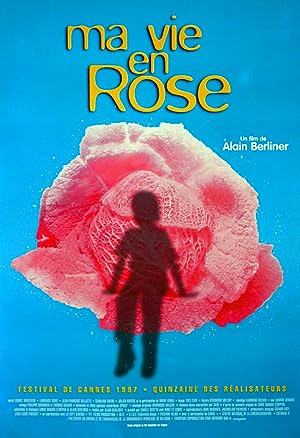