A widower and his sons fall in love with Angela (Laura Antonelli), the beautiful housekeeper. Each man uses his particular way to approach and capture the – apparently innocent and naive – young woman, and to see more of her sexy body. But only one of them succeeds in dominating and conquering her.

Although this movie is ostensibly a comedy, I personally found it pretty perverse and disturbing at times. Laura Antonelli is a maid who comes to work for a grieving widower and his rather disturbed adolescent son. She soon finds herself engaged to marry the widower but at the same time being sexually black-mailed by the son. She finds a way to turn the tables on the latter (although you’ll hardly feel to sorry for him).

The idea of a young boy losing his virginity to his stepmother-to-be seems pretty perverse, especially today, but there’s also a scene where the boy and his overweight friend spy on the latter’s slumbering and half-nude sister (who he later takes on memorably sexy bike ride). The sister is played by a young Tina Aumont, so you not only get a double dose of incest but a little Lolita with your Madonna.

This is the movie that made Antonelli an international sex star and features the famous scene where she’s standing on a ladder in a short skirt and no underwear, but frankly she’s a lot more memorable in other films I’ve seen like “Venus in Furs”, “The Divine Nymph”, “The Venetian Lady”, and even Lucio Fulci’s “The Eroticist”. This also doesn’t really quite make it as a comedy (although these dark and perverse continental variations are almost always preferable to the painfully unfunny American and British variety). It functions somewhat as a coming-of-age film I guess, even if the disturbed young protagonist isn’t necessarily a very sympathetic character. You could do worse I suppose. 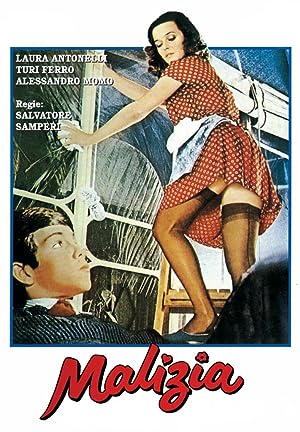 1 review for Malizia 1973 with English Subtitles