Manila in the Claws of Light 1975 with English Subtitles

Júlio Madiaga, a ‘provinciano’, arrives in Manila to search for Ligaya, his loved one.

In all the long, hit-and-miss years of Philippine cinema, no other movie made an impact as much as “Maynila”. This movie is proof that low-budgeted movies can truly be maximized by a beautiful, thought-provoking story. `Maynila’ is the tragic story of Julio (Bembol Roco), a small-town fisherman who went to the big city to search for Ligaya, his sweetheart (Hilda Koronel), losing his innocence and humanity in the process.

The acting was not superb, but the plot and storyline carried the cast all the way, making each character as memorable as the next. Julio’s journey through the streets of Manila is real. The direction was extraordinary. The climax and ending of the story is as surprising as ‘Fight Club’ and ‘Seven’, but will leave you thinking and utterly breathless, applause in seat. Never has a tragedy been as beautiful as this.

Also, never will the Philippines experience a movie as beautiful as this. Never again. 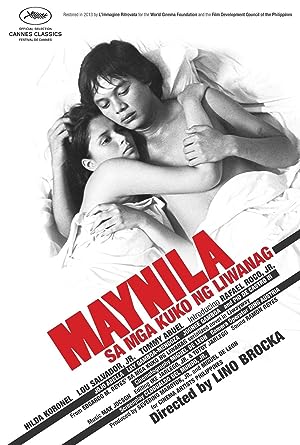