Giant preying mantis living in a south American jungle decide to move into suburban USA. Disguised as humans, the mantis are planning something.. Could it be connected to dad’s job in the power station perhaps ?. One day the daughter mantis forgets WHAT she really is when she’s with her boyfriend.. oops.

This flick is not available on Netflix nor on Amazon streaming, and I don’t know why, because it is truly hilarious. The negative comments here are incomprehensible to me. The comic premise of giant bugs disguising themselves as humans is no more difficult to accept here than it was in “Men in Black,” except this is a much better movie. The predictable left wing environmental theme is here, but is by no means overpowering enough to detract from the riotously funny look at middle class suburban life, with all its pretensions, facades, commercialism, and sexual foibles that this movie supplies. All the cast do their jobs wonderfully, Stockard Channing and Ed Begley Jr. in particular. Dabney Coleman does a great job in what could be called a cameo role. The script is just wonderful. I was able to catch this on one of the cable channels and I’m glad I was able to do so. It provided a wonderful hour and a half of comedic entertainment. 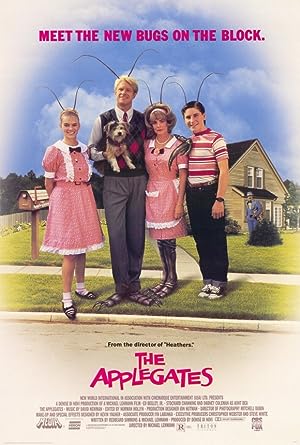 Be the first to review “Meet the Applegates 1990” Cancel reply