Men, Women and Children follows the story of a group of high school teenagers and their parents as they attempt to navigate the many ways the internet has changed their relationships, their communication, their self-image, and their love lives. The film attempts to stare down social issues such as video game culture, anorexia, infidelity, fame hunting, and the proliferation of illicit material on the internet. As each character and each relationship is tested, we are shown the variety of roads people choose – some tragic, some hopeful – as it becomes clear that no one is immune to this enormous social change that has come through our phones, our tablets, and our computers.

I recently got to see Men, Women, and Children, the newest feature from Jason Reitman (Juno, Up in the Air) and co-writing partner Erin Cressida Wilson (Chloe) based on the novel of the same name by Chad Kultgen.

The film is an ensemble drama, about the effect the internet and technology has had on relationships, intimate or otherwise. They’re no groundbreaking original story lines. There is a Romeo (Ansel Elgort) and his Juliet (Kaitlyn Dever). A marriage is on the rocks (Adam Sandler and Rosemarie Dewitt). An overbearing mother trying to control her daughter (Jennifer Garner). An unwitting parent trying to live through her child (Judy Greer and Olivia Crocicchia). A newly single parent trying to connect with his video game addicted son (Dean Norris and Ansel Elgort). An impressionable teenage girl dealing with severe body image issues.

All of the actors did a proficient job. Adam Sandler was excellent, in his first straight drama role since Reign Over Me (or Funny People, if you’d count that). Ansel Elgort and Kaitlyn Dever had both breakout performances. Each of their characters plights will your break your heart, and leave you rooting for them. And most of all, Jennifer Garner was as good as I’ve seen her in years. She did such an incredible job to make me hate her character as much as I did.

It’s a linear story from a big studio with an independent feel. Emotional fireworks are few in this movie. Some of the quieter moments feel the loudest.

This story is timeless. Nobody understands technology in this world. Not the teenagers who superficially know how to use it, and not the parents who are mostly right to be afraid of it. No one understands it. Every character in this story believes the internet can solve their problems. They are searching for a way to mask their wounds. It’s ironic that the internet provides anonymity, but those who search for it most crave human connection. 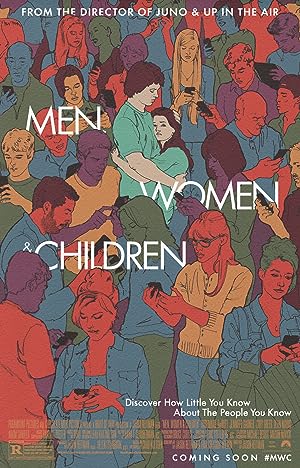 Men, Women & Children (2014)
119 min|Comedy, Drama|17 Oct 2014
6.7Rating: 6.7 / 10 from 28,038 users
A group of high school teenagers and their parents attempt to navigate the many ways the Internet has changed their relationships, their communications, their self-images, and their love lives.
Director: Jason Reitman
Creator: Chad Kultgen (based on the novel by), Jason Reitman (screenplay by), Erin Cressida Wilson (screenplay by)
Actors: Adam Sandler, Jennifer Garner, Rosemarie DeWitt, Judy Greer

Be the first to review “Men, Women & Children 2014” Cancel reply