Although Mikey is just a little boy, he is capable of anything…. Every family Mikey lives with has a series of unexplained “accidents” and hence he’s moved from home to home. After his original family die, accidently, Mikey is taken by authorities and placed into the care of adoptive parents. Of course they eventually come to learn that

A seemingly innocent and sweet little boy causes murder and mayhem in his new neighborhood and falls for the teenage girl next-door.

As others have pointed out, this film has sort of the same feel as “The Stepfather”, except the killer is now a little boy instead of a seemingly caring new dad. Of course, “The Stepfather” is the better movie, but that’s no secret.

I do think the film needs to be brought into the light. I had not heard of it until a book by T. S. Kord made me aware, and then when I went to watch it on Hulu, I found the picture quality was not the greatest and the film was cut for full-screen. With horror veterans Mimi Craven and Ashley Laurence, as well as Lyman Ward, it seems like this would be a good film for Scream Factory to pick up. 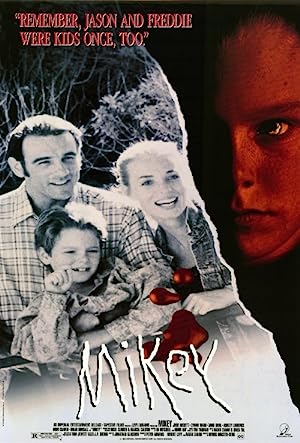 Be the first to review “Mikey 1992” Cancel reply