A fantasy about the lonely boy who is transferred from his dull life with his adoptive parents to the land where his real father is the king. In that country he sets out on a quest, together with his new friend, to destroy the evil Knight Kato.

This largely unknown film is okay, although flawed. Has influences from several countries, as it isn’t a one-nationality movie, which makes it a mix of cultures and film-making (for good and for bad). Not just this, it also heavily “drank” inspiration from other fantasy movies in details.

This is one of those films that make me wanna be taken to a world of fantasy, especially now when things only get worst every year. If that could be possible, that would be an excellent escape from reality. I am pretty sick of reality and probably many of us are.

The cinematography is astonishing and so is the pan flute music (including a song which was composed by ABBA’s former members Benny Andersson and Björn Ulvaeus – ‘Mio my Mio’, performed by the Swedish band Gemini).

As it was said in another review, the film doesn’t deliver a lot of action, but to compensate it offers decent amounts of adventure, although without being too intense or exciting. The main villain is creepy and so are his intentions and way of talking. But he doesn’t have that much of a role, so he ends up seeming less scary that he is.

In each of the two roles played by these boys, they are good friends. Actually, their friendship is very sincere and humble. They have mutual respect and help each other. Whatever happened to friendships like this these days, when everything is so changed for worst that almost nothing seems to make sense any longer? 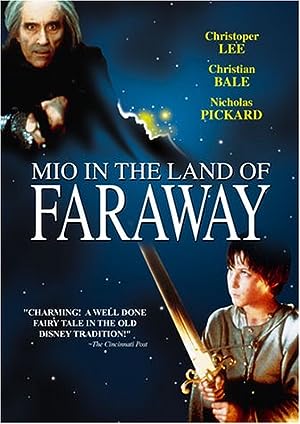 Mio in the Land of Faraway (1987)
99 min|Adventure, Family, Fantasy|01 May 1988
6.5Rating: 6.5 / 10 from 4,673 users
A fantasy about the lonely boy who is transferred from his dull life with his adoptive parents to the land where his real father is the King. In that country, he sets out on a quest, …
Director: Vladimir Grammatikov
Creator: William Aldridge (screenplay), Astrid Lindgren (novel), Andrei Ivanov (adaptation)
Actors: Nick Pickard, Christian Bale, Timothy Bottoms, Susannah York